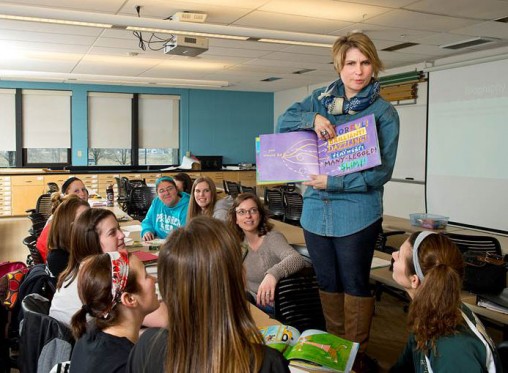 Her kindergarten teacher played the harpsichord in class, sang to the children and inspired young Betsy Crites to fall in love with teaching little kids.

“I had the world’s greatest kindergarten teacher,” Crites recalled. “Kindergarten was so cool. Everything I did in class, I would bring home and use it to play teacher. Having a good teacher to look up to changed my life.”

The Kids Day last spring had a Dr. Seuss theme. It attracted 170 area schoolchildren and their families as well as local teachers and school administrators. Crites had expected the two-hour event at the Lake Campus to draw 30 people.

This year’s Kids Day, scheduled for April 5, is called Clowning Around at the Lake. The circus-themed event will feature clowns, jugglers, face painting and a demonstration of how to make kettle corn.

Kids Day is designed to engage and excite young schoolchildren—pre-K through third grade—about reading and writing. More importantly, the events give Crites’ Wright State student teachers practice in developing lesson plans, working with students of different abilities and interacting with parents—skills they will need in the workplace.

Perhaps most importantly, Kids Day is a chance for the teachers-to-be to audition in front of school administrators.

“They are all looking for teachers,” Crites said. “They’re shopping.”

Crites graduated from Coldwater High School, began her college career at Lake Campus and obtained her bachelor’s degree in education from Wright State in the mid-1990s. She started teaching in Celina City Schools and later expanded her duties to include helping educators master interactive whiteboards, a teaching technology in which a computer’s desktop is projected on to the surface of the large board and controlled by a user’s finger.

Crites later began working at Wright State as an adjunct instructor, helping future teachers learn how to use whiteboards and also teaching methods classes like phonics, reading, writing and technology. In 2011, she was hired by Wright State as a full-time instructor of education, but she also works occasionally for Celina City Schools as a technology coach.

“I’m still in the classroom; I’m doing lessons with the kids,” she said. “I think it’s important to be in that setting so you know what the latest things are.”

Crites makes sure her Wright State teachers in training get to apply their learning—and the lesson plans they develop—in actual classrooms.

“It gives them those real-world experiences,” she said. “Working with kindergartners and first-graders is totally different than talking about it. What happens when Johnny gets sick in the middle of the lesson?”

Crites said Wright State expects a lot out of its education students because teaching has become so demanding.

“When your school day is over at 3:15 or 3:30 p.m., your day is not over; you are just getting started,” she said. “You spend as much time preparing for the next day as you just put in teaching. And you wear that teacher hat whether you’re at school, you’re at Walmart, you’re at the ball game.”

Crites said spending the past 19 years in education and the past three at Wright State helping educate future teachers is the culmination of a lifelong love affair with teaching and a way to give back.

“I think we’re doing a really good job preparing our students,” she said.