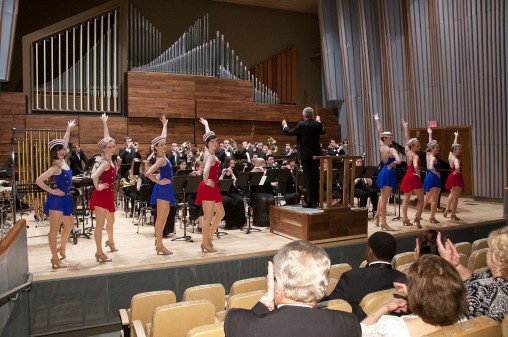 In customary fashion, Arts Gala 2014 kicked off with a patriotic show that’s always a crowd pleaser.

Wright State University’s annual ArtsGala offered patrons a night of unparalleled entertainment. Fine and performing arts students displayed their rich talents throughout the Creative Arts Center, and guests were treated to a dizzying array of food and fun.

Attendance was higher than ever before with more than 700 patrons on hand to support student scholarships in theatre, dance, art, music and motion pictures.

The finals numbers aren’t in just yet, but it’s safe to say that in the 15 years the university has hosted the event, over $1.75 million will have been raised for arts students at Wright State.

In customary fashion, Arts Gala 2014 kicked off with a patriotic show that’s always a crowd pleaser.

Attendees place a bid on an item at the silent auction.

For the second year in a row ArtsGala set a record attendance.

Mimes. They know how to have fun.

Students performed scenes from ‘The Magic Flute’ in the Recital Hall.

The talents of the Musical Theatre students were on full display during three abbreviated performances of ‘Les Misérables.’

The Rainbow Room featured solos and duets that brought the house down.

As always, the deserts stole the show at the end of the night.

First they performed for ArtsGala patrons, then students danced the night away.