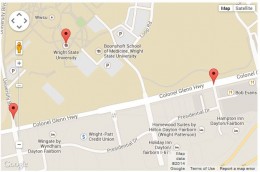 A major resurfacing and road-improvement project by the City of Fairborn that will result in traffic restrictions on a stretch of Colonel Glenn Highway in front of Wright State University is scheduled to begin May 5.

While traffic will be maintained at all times in both directions during the months-long project, dedicated turn lanes on Colonel Glenn will be eliminated.

Motorists who normally enter the campus from Colonel Glenn to University Boulevard or Center Park Boulevard are encouraged to use alternate routes.

One alternative route into campus is to turn left off of eastbound Colonel Glenn onto Zink Road, go right on Kauffman Avenue, and then right onto Wright State Road.

Another would be to turn right on Colonel Glenn from North Fairfield Road and then left on University Boulevard.

The existing asphalt on Colonel Glenn will first be milled off. If the concrete base below also needs to be replaced, that would likely extend the work beyond the projected Nov. 27 finish date and possibly into next spring.

The project will also involve replacing the curb and gutters on the campus side of Colonel Glenn, upgrading ramps, constructing three 250-foot-long curbed, grassy traffic islands and resurfacing the entire pavement with new asphalt.

Papay said the islands are designed to “calm” the flow of traffic and will likely make it more inviting for pedestrians to cross Colonel Glenn.

In addition, the islands will help dress up the front porch of the university. Papay said there will be opportunities for campus groups to sponsor sculptures or the planting of trees.

“There is a community aspect to it,” he said.

More information on the road project is available at wright.edu/roadwork.