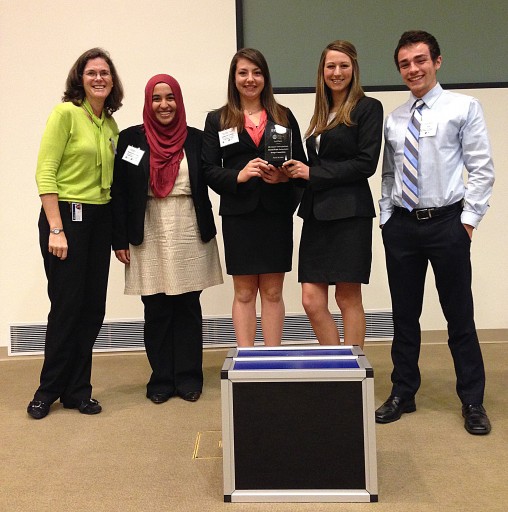 A team of Wright State engineering students took home top honors at the National Global Health Technologies Design Competition in Houston in late March. They competed against two dozen other teams to claim first prize in the the competition.

They were advised by Thomas Hangartner, Ph.D., distinguished professor and chair of the Department of Biomedical, Industrial and Human Factors Engineering. The team of seniors designed the receptor as their senior design project.

The receptor, which looks like a small steel case with black and blue glass panes, is designed for use as an X-ray imaging device in developing countries. The box uses a high-definition camera to take pictures of X-rays as they pass through the body, saving health clinics and hospitals the costs associated with storing and developing special X-ray films.

“With this device, we don’t have to bring the hospitals new film every year,” Hangartner said. The fact that the image is now digital, he added, means that doctors can send the image around the world via email if they have a question about a diagnosis.

The team’s breakthrough came in developing a way to focus the lens of the camera onto the X-ray image. Previously, researchers had struggled to find a way to focus because no light enters the box. Their solution to the focus problem is currently being considered for a patent.

“This remarkable team worked hard to develop a device that addressed a critical need of these communities in a new and useful way,” said Nathan Klingbeil, Ph.D., dean of the College of Engineering and Computer Science. “They’ve truly found the crossroads of education and innovation and, as a college, we’re very proud of them.”

While the machine produces medical-grade X-ray results, the device uses off-the-shelf components, ensuring not only low operating costs by eliminating film development but also low costs for purchasing and replacing the equipment. Hangartner predicts that the cost of the device will be an order of magnitude—or as much as 10 times—lower than comparable, commercially available, digital X-ray systems.

Wright State’s team was funded by grants from the Department of Biomedical, Industrial and Human Factors Engineering and a social entrepreneurship grant from the Division of Multicultural Affairs and Community Engagement.

“The project the students are working on epitomizes the type of game-changing creativity we were hoping to support with the Social Entrepreneurship Fund,” said Kimberly Barrett, Ph.D., vice president of multicultural affairs and community engagement. “It has the potential to significantly improve health care in many low income communities both locally and abroad.”

Hangartner, who served as a judge for other projects in the competition, said the project was likely chosen for the first prize because of the significant impact it will have on health care in the developing world. He will take a team of students to Malawi later this year to install the device before monitoring its usage and making changes. He also plans to release a commercial product next year.