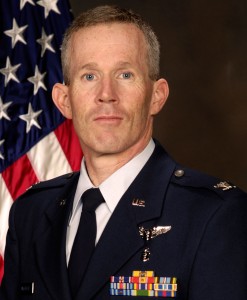 Col. Kent McDonald is assistant professor in the Department of Psychiatry at the Boonshoft School of Medicine.

The Aerospace Medical Association named Col. Kent McDonald, M.D., the recipient of the Raymond F. Longacre Award, the highest award in aerospace medicine, for advancing the understanding of aviator personality, unique environmental stressors and their impact on optimal performance.

An assistant professor in the Department of Psychiatry at the Wright State University Boonshoft School of Medicine, McDonald also is the chief of the Neuropsychiatry Branch, Aeromedical Consultation Service, U.S. Air Force School of Aerospace Medicine at Wright-Patterson Air Force Base.

The award honors the memory of Maj. Raymond F. Longacre. The international award is given annually for outstanding accomplishment in the psychological and psychiatric aspects of aerospace medicine. The Aerospace Medical Association will present the award to McDonald on May 15 in San Diego at its 85th annual Scientific Meeting.