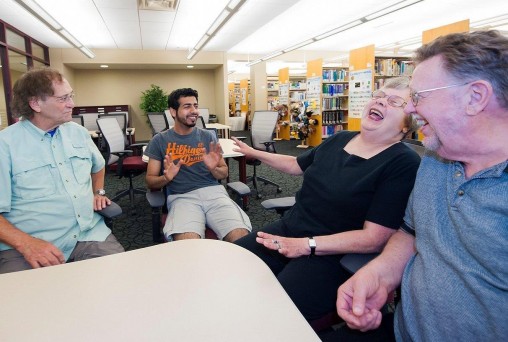 But despite their difference in age and nationality, Wagley and Alshehri do have at least one thing in common. They are conversation partners—participants in an innovative new Wright State program that matches retirees with international students seeking to improve their English.

Alshehri arrived at Wright State last fall from his home in Riyadh to pursue his master’s degree in microbiology and immunology. He began taking English courses, but found that he had few opportunities to practice—save going to the store or restaurants. Then he connected with Wagley and Wagley’s wife, Lorraine.

“When I started to speak to them, they helped me to improve,” Alshehri said. “We talk about everything. I describe for them my country. I show them pictures, videos. We talk about Europe, America, their culture.”

The three meet weekly for 60 to 90 minutes, either at a campus library or the Wagleys’ home. They don’t plan their conversations. They just talk and see where it leads.

Retiree Abe Bassett, former chair of Wright State’s theatre department, was matched up with a 60-year-old Saudi student. The two would use their iPads to help in the communication process, pulling up maps and using word-translation apps.

“He had a lot of questions about how things work in America,” Bassett said. “How do you get loans? What is a mortgage? Practical things.”

Bassett and the Wagleys are among a half dozen retired Wright State faculty, staff or spouses taking part in Conversation Partners, which is part of Wright State’s LEAP Intensive English Program and is coordinated by Mailinh Nguyen, a LEAP faculty member.

LEAP provides full-time English instruction and helps non-native speakers develop the linguistic, academic and social skills they need to be successful at a university in the United States. There are currently about 170 students in the program, up from roughly 25 in 2002.

Conversation Partners with retirees was the brainchild of Wright State’s Jim Sayer, who calls it a “win-win.”

“The foreign students get to talk with retirees to enhance their English language skills, and the program provides yet another venue for retirees to contribute to Wright State,” he said.

When Wagley was teaching business management in Germany at a Wright State partner school, one of his students ask him to meet weekly and just talk so the student could improve his English. So when Wagley, who retired in 1995, learned that Wright State was starting such a program, he was all in.

“I’m surprised more people haven’t taken advantage of doing this,” said Lorraine Wagley, who along with her husband has hosted international students from five different countries over the years.

Robert Wagley said the couple had known very little about Saudi Arabia, but now knows a lot, thanks to Conversation Partners.

“You hear about Saudi Arabia and then you start studying about it and try to learn more. And we wouldn’t have done that,” he said.

Wagley said talking with Alshehri has also resulted in his own personal growth.

“You self-examine your own feelings when you’re trying to explain something about your own country,” he said. “I don’t think you can interact without truly self-examining.”

Lorraine Wagley said it is easy to talk to Alshehri and that the three of them have become friends, with the couple sometimes offering parental-like advice.

She said the experience has caused her to re-evaluate some of her beliefs and that she has become less tolerant of Americans who stereotype people from other countries.

Alshehri said the experience has changed him and taught him not to make judgments about people based on what others may tell you.

“The people here are very kind,” he said. “They didn’t know me 10 years ago, but they still help me.”

Wagley said it makes him proud that Wright State meets students where they are experientially and gets them to the finish line. “It shows that it is a student-centered university,” he said.