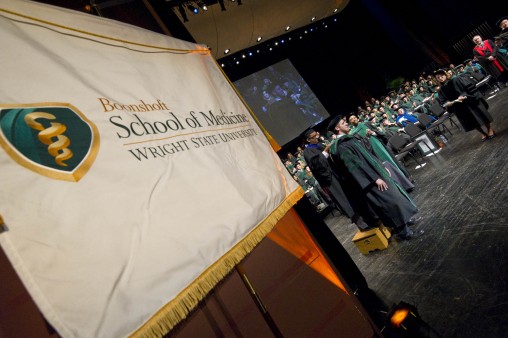 The Boonshoft School of Medicine’s commencement ceremony included a “hooding ceremony” and the presentation of numerous awards to graduates and faculty.

After four or more years of intense study and specialized training, 105 medical students of the Wright State University Boonshoft School of Medicine class of 2014 received their M.D. degrees during the school’s commencement ceremony at the Benjamin and Marian Schuster Performing Arts Center on Friday, May 23.

In July, the graduates will begin prestigious residencies and receive advanced training in the medical specialty of their choice. The new physicians will enter outstanding residency training programs in Dayton, throughout Ohio, and nationwide, including at the Cleveland Clinic, University of California at San Francisco, Duke University, the Mayo Clinic, University of Pennsylvania and New York Presbyterian-Columbia. 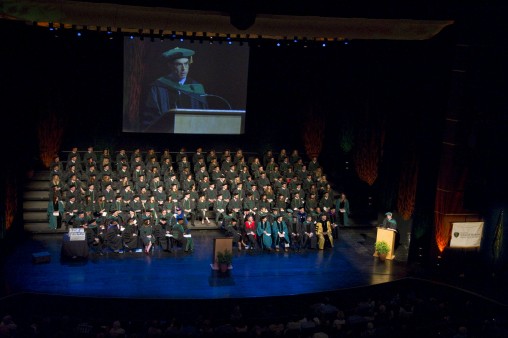 Each year the graduating class presents an Appreciation Award to recognize an individual or organization for significant contributions to the medical school. The class of 2014 honored Howard M. Part, M.D., the fifth dean of the Boonshoft School of Medicine, for his exceptional leadership in support of students and medical education. Part joined the fully affiliated faculty as an assistant professor in the Department of Internal Medicine in 1988 and was named dean in 1999.

Marjorie A. Bowman, M.D., dean of the medical school, presented the Dean’s Award to graduating student Paul A. Krebs, who demonstrated a commitment to academic excellence, embodied empathy and compassion toward others, exemplified personal integrity and professionalism and earned the respect and trust of classmates and faculty.

The Teaching Excellence Award was presented to Gregory Toussaint, M.D., associate professor, pediatrics, who was selected by the class of 2014 as the faculty member displaying outstanding professional skill and pride in discharging his instructional duties.

The Leonard Tow Humanism in Medicine Award was presented by The Arnold P. Gold Foundation to graduate Elizabeth A. Markus and to faculty member Brenda Roman, M.D., professor, psychiatry and assistant dean for curriculum development, for consistently demonstrating compassion and empathy in the delivery of care to patients.

The American Medical Women’s Association Glasgow-Rubin Citation for Academic Achievement was given to Lisa M. Anacker, Meredith R. Pesce, Koriann K. Reed and Catherine A. Ulman, who are graduating in the top 10 percent of the class.

The Glenn C. Hamilton, M.D., Excellence in Emergency Medicine Award was given to Christopher D. Kohls, recognizing interest and accomplishment in emergency medicine.

The Society for Academic Emergency Medicine Award was given to Samuel K. Corbo, the graduate who has demonstrated outstanding proficiency in emergency medicine.

The Walbroehl Award for Family Medicine was given to Erin M. Bates, for excellence in family medicine.

The Homer Cassel, M.D., Award, honoring the late Homer D. Cassel, was presented by the Dayton Society of Internal Medicine, to Ashley N. Hotz, for outstanding scholarship and commitment to the specialty of internal medicine.

The Geriatric Medicine Award, sponsored by the Ohio Department of Aging, was given to Elizabeth A. Markus, for excellence in the study of geriatrics.

The Department of Pediatrics Award was given to Michael F. Perry, who is committed to a career in pediatrics and has shown outstanding performance in pediatrics during the clinical years.

The Dan W. Elliott, M.D., Award was presented to Benjamin J. Bates, who is committed to a career in surgery and has shown outstanding performance in surgery during the clinical years.

The Reach Out of Montgomery County Student Volunteer Appreciation Award was given to Robert A. Beaulieu and Matthew Y. Byun.

The Global Service Award was presented to Shaina M. Hecht, who has a history of volunteering and rotating in a medically underserved area internationally.

The 2014 Excellence in Public Health Award was given to Kyle A. Davis.

The John Worthman, M.D., Award was presented to Paul A. Krebs for entering into the Wright State University Family Medicine Residency.