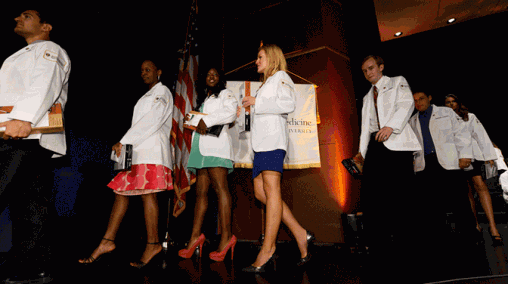 The Wright State University Boonshoft School of Medicine will welcome 110 students during a special ceremony on Saturday, July 26, formally marking the start of their medical education. The annual Convocation and White Coat Ceremony will be held at 12:30 p.m. in the Schuster Performing Arts Center in downtown Dayton.

During the ceremony, students will take their first oath of professional medical ethics, concluding with the words, “I commit myself to a lifelong journey of learning how to cure, relieve and comfort with humility and compassion.” Each student also will receive a white coat—a traditional symbol of the medical profession—personalized with his or her name and the medical school patch.

This is the second year that each student also will receive a stethoscope engraved with the words, “Excel in Leaving a Mark,” thanks to the Jason Madachy Foundation, Neal Barney, M.D., class of 1983, and other alumni. The foundation has given hundreds of stethoscopes to medical students nationwide in honor of Jason Madachy, who died tragically in June 2007 just before he was about to start medical school at Marshall University.

The Convocation and White Coat ceremony represents an important milestone in each student’s journey to enter the medical profession. It also marks the first time these students will gather as a class and meet the people who will share, during the next four or more years, what may be some of the most memorable and intense experiences of their lives.

The students, who were carefully selected from a group of more than 3,600 applications, will begin orientation on Friday, July 25. Classes will soon follow.

The class of 2018 draws from a variety of undergraduate experiences. Educated at various universities across Ohio, including Case Western Reserve University, Ohio State University and Wittenberg University, members of the incoming class also hail from Brown University, Cornell University, Duke University, UCLA and University of Notre Dame among others.

From volunteering at homeless shelters to building houses for Habitat for Humanity, they already have shown a strong commitment to community service both at home and abroad. Several have taken mission trips with their churches, sororities or fraternities. One student volunteered at a smallpox/polio immunization clinic in Togo, Africa. In the United States, others have volunteered at after-school programs, outreach programs, nursing homes, HIV intervention programs and the Red Cross.

Forty-eight percent are women, while 52 percent are men. Seventy percent speak more than one language, including American Sign Language, Arabic, French and Spanish.

The speaker at this year’s Convocation and White Coat Ceremony is John L. Lyman, M.D., FACEP, regional medical director and director of emergency medicine residency relations at Premier Physician Services. An alumnus of the School of Medicine, Lyman received his medical degree and completed his residency in emergency medicine at Wright State University. He is an associate professor with the WSU Department of Emergency Medicine.