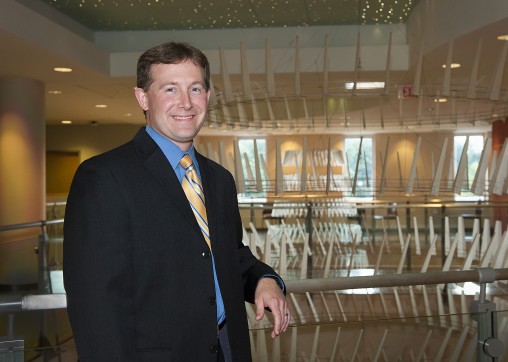 Most recently Mike Wiehe worked as a consultant for the Dayton Development Coalition. Before that he spent 12 years working in politics.

He’s a politically savvy professional with big ideas and the networking skills and contacts to bring in new work.

Mike Wiehe is the new director of the Center for Urban and Public Affairs (CUPA) in Wright State University’s College of Liberal Arts. He believes CUPA is ready to take its operations to the next level.

Wiehe plans to leverage the stellar relationships and credibility that CUPA has earned through the many years of leadership from former director Jack Dustin and expand the impact and scope of the work of the center.

His goal? Turn CUPA into a recognized thought leader in the region as well as in Ohio.

CUPA is a third-party provider of data collection and analysis and often works on projects for local governments, public health agencies, local nonprofits and state agencies like the Ohio Board of Regents and Department of Health. Economic impact studies and surveys are just two examples of work the center excels at and will continue to do.

“The goal is to bring in larger-scale projects — whether from federal or state grants or even at the local level,” he said. “There are ways to get people to think bigger, envision how to take on projects of bigger scope, start seeking out the big fish in addition to catching the fish that swim in our pond.”

Most recently Wiehe worked as a consultant for the Dayton Development Coalition. Before that he spent 12 years working in politics.

He got his start in the political arena just after graduating with a B.A. in political sciences from Wright State. First he worked as a legislative aide for three years for former Dayton Mayor Mike Turner. Then he worked in state politics for a year with former Ohio Gov. Bob Taft.

Soon after he earned a master’s degree in urban affairs from Wright State he joined Turner again when he was elected to Congress as his legislative director. Working in Washington, D.C., Wiehe directed Turner’s policies on the military, urban issues, housing, agriculture, environment, intelligence, foreign affairs, information technology, postal issues and any issues with Dayton region. The last four years he spent with Turner, he worked in the Dayton region and led Turner’s district operations.

An expert in political operations, policy development and community planning, Wiehe has worked directly with CEOs of companies, presidents of universities and state and federal politicians. Wiehe has particularly good contacts with defense industry leaders and is determined to make in roads with Wright State’s biggest neighbor next door.

“We’d like to work more with the Air Force and Wright-Patterson Air Force Base to see what we can do with data collection, data analysis and making connections for them,” said Wiehe. “They’re our neighbor and we’re going to build that relationship in the hopes that in five years CUPA will be known as a community partner and thought leader in the defense and Air Force realms.”

Raising CUPA’s visibility is a big priority for Wiehe. He believes that bigger, more visible projects must be won by the center. The benefits he said would support economic and community growth in the area, while at the same time raise the center to a level it’s never operated at before.

“We need to see things through a different lens — to look for different opportunities because there are opportunities everywhere,” said Wiehe. “CUPA’s exceptional reputation plus my contacts in new areas should lead to new opportunities that help all parties involved.”

As much as he is focused on raising CUPA’s external visibility, Wiehe wants the same improvement to happen internally too. “In three to five years I want CUPA to be known on campus as one of the top three research centers at Wright State,” he said.

Wiehe believes opportunities for working with faculty are nearly limitless and feels that many on campus still don’t know what CUPA does, or more importantly, what the center can do for them.

“Like many things in the Midwest, I think we have suffered from being a ‘best kept secret.’ CUPA does great work and we will continue supporting local institutions, but we cannot and will not be a secret any more,” said Wiehe.