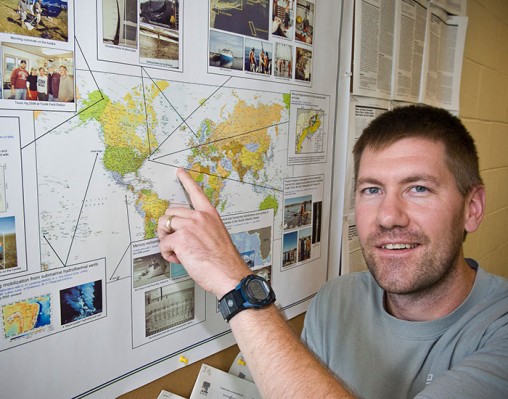 Wright State professor Chad Hammerschmidt is part of a research team whose findings on the mercury levels in the oceans are reported in this week’s issue of the journal Nature.

Mercury levels in the ocean have more than tripled in some regions as a result of human activity, the report suggests. Estimates of the amount of mercury that have reached the ocean as a result of anthropogenic perturbations remain uncertain and are largely based on model studies.

The new study presents an observation-based estimate of the total amount of anthropogenic mercury present in the global ocean, with almost two-thirds of the mercury residing in water shallower than 1,000 meters.

Hammerschmidt, Ph.D., associate professor of earth and environmental sciences at Wright State, is part of a research group that also includes researchers from the Woods Hole Oceanographic Institution (WHOI), Observatoire Midi-Pyréneés in France and the Royal Netherlands Institute for Sea Research

Their work was funded by the U.S. National Science Foundation and the European Research Council and led by WHOI marine chemist Carl Lamborg.

Mercury is a toxic trace metal that accumulates in aquatic organisms and whose emissions to the environment have increased significantly as a result of activities such as mining and fossil fuel combustion. Lamborg and colleagues measured mercury levels during several recent expeditions to the Atlantic, Pacific, Southern and Arctic oceans.

Their findings suggest that human disturbances to the global mercury cycle have led to an approximately 150 percent increase in the amount of mercury in thermocline waters and have more than tripled the mercury content of surface waters.

This information may add to our understanding of the processes and the depths at which inorganic mercury is converted into toxic methyl mercury and subsequently incorporated into marine food webs.

The study, “A global ocean inventory of anthropogenic mercury based on water column measurements,” is available on the Nature website.

Read more about Hammerschmidt’s research in the NewsRoom.