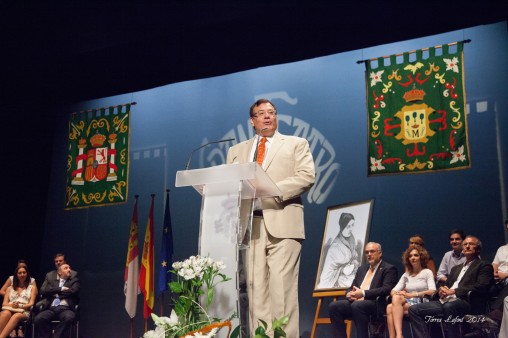 To say that it was a good summer for Julian Gomez-Cambronero, Ph.D., would be an understatement. The professor of biochemistry and molecular biology began the season by successfully organizing an international academic conference and capped it off with a prestigious award in his hometown of Manzanares in the famed La Mancha region of Spain.

Cambronero, a Brage Golding Distinguished Professor Award recipient from last year, received the “Hijo Predilecto de la Ciudad” award. Cambronero said the award translates to English as the Predilect Son from the City, or “favorite son.” The award was voted on unanimously by the city council and presented by the mayor of Manzanares.

“I feel very good about it because this was very personal for me here in the town where I was born,” said Cambronero, who was also joined by his parents, wife and children at the ceremony.

A writer and a sculptor also from the town were recognized with the same award. It is given once every four years to individuals who have demonstrated international special achievements in the arts and sciences. Cambronero was recognized for scientific achievement as well as having created a large model of the solar system in a local park in Manzanares. 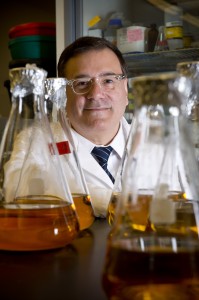 The recognition capped a busy summer for Cambronero, who also organized the Federation for American Scientists for Experimental Biology (FASEB) international conference, which was themed “Phospholipid Cell Signaling and Metabolism in Inflammation in Cancer.”

“These conferences are highly regarded in the scientific community in part because presentations and discussion topics must be about current, mostly unpublished research,” said Cambronero, who made news last year when he discovered a protein that slows tumor growth and metastasis in breast cancer.

Each summer, a series of science research conferences are sponsored by FASEB, which allow experimental biologists to meet and explore new approaches to current research areas.

Strict rules of the conference directed presenters to share work that is largely unpublished and therefore cutting edge. No recordings or transcripts are allowed to take place at the conference. Cambronero did share topics of particular interest that included:

Cambronero said that he could not have led this conference without support from the Department of Biochemistry and Molecular Biology, the College of Science and Mathematics, the Boonshoft School of Medicine and the conference’s major sponsors Avanti Polar Lipids Inc., Rutgers University, Wright State University and the National Institutes of Health.

Cambronero targeted two groups of researchers to bolster attendance — those who work on research in inflammation and those from cancer because both are major research areas and garner public interest. He pursued both big-name researchers in the field and young researchers by giving them equal time to share their research. He also moved the conference from a site where guests had to spend a week in dormitories with no air conditioning to the tourist destination of Niagara Falls and a comfortable hotel.

“This conference was a success in many ways,” said Cambronero. “Most importantly we had more participation than ever before, and the scientists, who can be a tough crowd, said it was a success from a scientific point of view.”