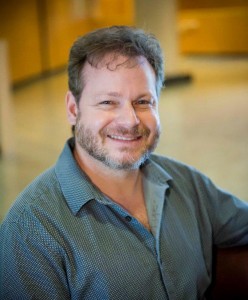 Dane Thor Daniel, an associate professor of history at the Lake Campus, was selected by Germany’s national academic agency to serve as a research ambassador for the 2014–15 academic year.

Somewhere along the way to becoming a jazz pianist, Wright State University’s Dane Thor Daniel wound up as an expert in the history of science in Germany.

And now the associate professor of history at the Lake Campus has been selected by Germany’s national academic agency as one of 18 educators in the United States and Canada to be research ambassadors for the 2014–15 academic year, joining colleagues from the likes of Notre Dame and Georgetown.

“I’ll be working as a liaison for the students and faculty at Wright State who are interested in research or study in Germany,” said Daniel, Ph.D. “I have a lot of experience living in Germany and researching there. There are a lot more opportunities than people think.”

Daniel grew up in Greeley, Colo., where his passion for music led him to get a degree in jazz studies at the University of North Texas. But while he was there, he took a class that studied the influence of Charles Darwin’s theories on society, and he became fascinated with the history of ideas.

So he got his master’s degree in history at North Texas and his Ph.D. in the history and philosophy of science at Indiana University.

At Indiana, Daniel had taken a class on Paracelsus, a 16th century German alchemist known as the Father of Modern Medicine for taking medicine from an emphasis on herbs to one on chemicals. Paracelsus was also a lay theologian who interpreted the Bible and pushed a radical theology during the beginning of the Protestant Reformation

“I wanted to look at this intersection of science and religion in his thought,” Daniel said. “This was a perfect blend for me.”

So the German Academic Exchange Service (DAAD), the national agency for the support of international academic cooperation, gave Daniel a fellowship that led to three years of doctoral research on Paracelsus at the Free University of Berlin. In order to unlock the mysteries in Paracelsus’ manuscripts, Daniel had to master German and palaeography, the study of ancient and historical handwriting.

Daniel has since worked as a postdoctoral fellow at the Dibner Institute for the History of Science and Technology at MIT and been a guest scholar at the Institute for the History of Medicine, University of Bonn. He joined the faculty at Wright State in 2005, turning down opportunities to teach and do research in Lebanon, Singapore, West Africa, Massachusetts and Maryland.

“To do the type of work I wanted to do, I had my best offer from the Lake Campus,” he said. “I teach the whole gamut of western civilization — ancient to modern. I love having my hands on all of that.”

Daniel is taking a year of professional-development leave to complete a monograph about religion and science in Paracelsus’ thought and an English translation of Paracelsus’ magnum opus.

He will also help DAAD promote opportunities for students and faculty to study, research and teach in Germany. The DAAD provides financial support to more than 100,000 people every year.

Daniel said as many as 30 percent of the people who apply for these opportunities get them.

“There are a lot of opportunities for engineers, scientists, for example,” he said. “And in engineering and science, you don’t even have to speak German. Most of those classes in Germany are in English.”

Daniel has come to revere the German culture and says Berlin is one of the most culturally rich and cosmopolitan cities in the world.

“I don’t know where you could find better museums, better musical productions, better theater,” he said. “And higher education in Germany is very highly valued.”

For more information, visit daad.org/ra-program or email Daniel at dane.daniel@wright.edu.