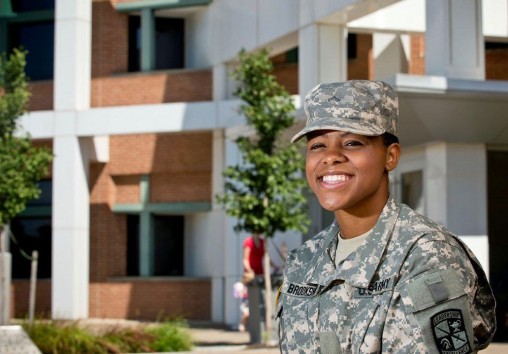 ROTC cadet Alana Brookshire is studying social work at Wright State in order to fulfill her dream of serving as a social worker in the U.S. Army.

She was torn. She wanted to become a social worker, but loved the idea of being in the military. Then she discovered she could do both.

“I was so happy,” recalled Alana Brookshire, now a senior social work major at Wright State and an Army ROTC cadet.

Brookshire grew up in Dayton. Her father is the pastor of Ark Ministries International in Huber Heights, and her mother is a day care provider. The couple provided a tight-knit family structure for Brookshire and her four siblings.

Brookshire attended Thurgood Marshall High School, where she was a track standout and played varsity basketball for three years as a shooting guard and small forward. She dreamed of running track in the Olympics and playing basketball in the WNBA.

“I was also interested in the military when I was in high school, but I don’t think I was mature enough to actually make the decision,” she recalled.

When she was 18, Brookshire married her high school sweetheart and moved to Jacksonville, N.C., where her Marine husband, Anthony, was stationed at Camp Lejeune.

Brookshire enrolled at North Carolina Central University and majored in athletic training. She volunteered at a boys and girls club, where she came to realize how much she loved children.

“They were from an urban area, and the problems they had to face every day — the stories they used to tell me,” she said. “I realized that I loved helping them.”

So Brookshire switched her major to social work her junior year, did some teaching at a preschool and worked as a counselor for children at a YMCA.

In 2012, after five years in North Carolina, she and her husband moved back to Dayton. Brookshire enrolled at Wright State because of the university’s strong social work program.

“Then I started reading about different ways I could be a social worker, and I found out you can do it in the military,” she said.

So Brookshire joined the Army ROTC. After getting her bachelor’s and master’s degrees in social work, she will be commissioned and embark on a career as an Army social worker.

“I feel like what I’m going to be doing is closely working with families and soldiers with their problems, like coming back from deployment,” she said.

“I like how the small parts fit into one big picture; and the customs and traditions that come with it, the people you get to meet, the friendships,” she said.

Brookshire said she feels accepted at Wright State and connected to the campus community.

“It’s being able to walk around in uniform and people notice you instead of just being another person on campus,” she said.