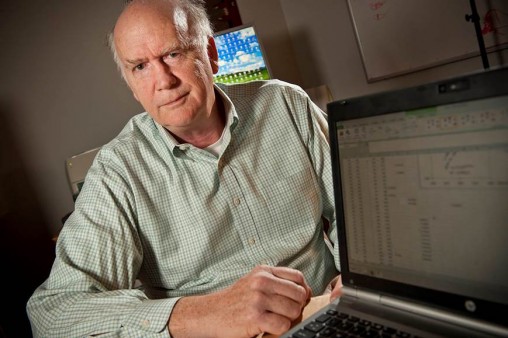 Wright State physics professor Allen Hunt was among the first to calculate how fast Ebola was spreading and its case fatality rate.

“The only way to get the rapidly growing Ebola outbreak under control and prevent more cases in the United States is by a more massive response where it originated, in West Africa,” says Wright State physics professor Allen Hunt, who has done a statistical analysis of the disease’s spread.

More than 8,900 people in Guinea, Liberia, Nigeria, Senegal and Sierra Leone have contracted Ebola since March, according to the World Health Organization, making it the biggest outbreak on record. More than 4,400 people have died.

Hunt was among the first to calculate how fast Ebola was spreading and its case fatality rate. His findings have since been published online in the journal Complexity (subscription required).

Hunt began tracking the outbreak in the middle of the summer after it appeared that it was growing exponentially, with each infected person infecting an average of between 1.5 and two other people.

“The cases started on their exponential trajectory in mid-May, had a doubling time of 27 days and by mid-September had gone through nearly five doubling times,” said Hunt, Ph.D., who teaches in the Department of Physics in the College of Science and Mathematics.

The traditional means of combating Ebola is to isolate the patients and track all of the people with whom they came into contact. In previous outbreaks, there were never more than about 500 cases.

“By early October, there were 8,000 known cases and estimates that there were 2.5 times as many cases altogether,” Hunt said. “That’s 20,000 cases and a half a million people to track.”

“That number of people,” Hunt said, “cannot be tracked with a few hundred or even a couple of thousand medical personnel.”

Hunt says there needs to be a massive, coordinated response in West Africa.

“You need supplies and people on the ground,” he said. “And the people treating the patients need to be protected.”

Hunt’s analysis in early September concluded that the case fatality rate was 71.7 percent, about one week before the WHO changed its estimate from 50 percent to 70.8 percent.

Hunt used the typical incubation period for Ebola of 10 days and the typical time of death, which is nine days after the onset of symptoms, to determine the time period between different generations of the disease, and then applied an exponential function to determine about how many people each person infects.

“You cannot keep all of the cases out; it’s a blind hope,” he said. “We have to be prepared.”

While not connected to his work at Wright State, Hunt used his physics tools to do the analysis.

“Any physicist with a serious humanitarian interest in the problem could have come up with this,” he said.

Hunt believes that closing the borders of the affected African countries is ethically unacceptable, because millions of people would be condemned to death.

“Even though it might be nearly impossible to track the patients’ contacts, it is the only way to proceed. So you need a bigger response,” he said. “This is what motivated me to try to get the information to the public.”