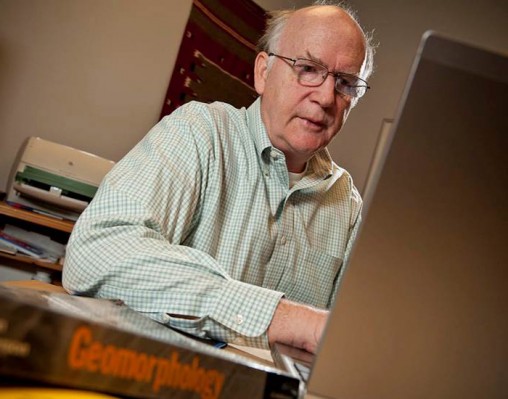 Wright State physics professors Allen Hunt (pictured) and Thomas Skinner discovered a formula predicting the rate at which soil develops from the surface to the underlying rock, a breakthrough that could answer questions about greenhouse gases.

Wright State University researchers have discovered a formula that accurately predicts the rate at which soil develops from the surface to the underlying rock, a breakthrough that could answer questions about greenhouse gases and has potential applications in agriculture.

The formula was developed by physics professors Allen Hunt and Thomas Skinner and will be published in Chaos, a physics journal.

Their research into transport of solutions in porous media, supported by one U.S. Department of Energy grant, two National Science Foundation grants from Hydrologic Sciences, and one from Geobiology and Low Temperature Geochemistry, began in 2008.

“We can predict the rate of change of soil depth in time — years to millions of years,” said Hunt. “This is the kind of prediction that has never been made before in the geosciences.”

Weathering takes place when surface solutions percolate down through the ground until they meet the underlying rock. The process of weathering of rocks removes carbon dioxide from the atmosphere. That in turn reduces the greenhouse gases that many scientists believe are causing global warming and resulting in the melting of the polar icecaps and changing weather patterns.

Hunt said scientists have been trying for years to quantify such silicate weathering and its effect on the global carbon cycle. Up until now, they have had to rely on modeling.

Hunt and Skinner, who teach in the College of Science and Mathematics, say they can use their formula to predict accurately how much soil will be produced at the bottom of the column.

“If you erode the soil off the top rapidly, which happens in many mountain-building regions because of their extreme precipitation and steep slopes, then you produce soil at the bottom much faster,” Hunt said. “So you can predict how much faster CO2 will be drawn down from the atmosphere. This is a way to understand the geologic past and the long-term future.”

The formula also has potential applications in geomorphology, in figuring out how fast hills are worn down and sediment gets swept into the ocean. It could also potentially be used in agriculture by enabling farmers to reduce fertilizers through applying them more efficiently.

“And it becomes important when you look at buried radioactive wastes, how fast they get broken down and leach out, how much is left after a long time,” Hunt said.

Hunt, who joined the faculty in 2004, said Wright State is a special place, because it allows inquisitive people to collaborate.

“There are pockets of excellence at Wright State, remarkable excellence,” he said.