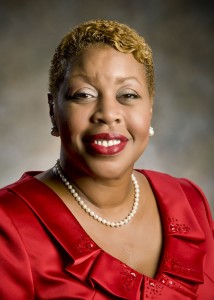 For promoting citizen and employee engagement in the Dayton community Wright State University and Kimberly Barrett, vice president for multicultural affairs and community engagement were recognized by the Dayton Unit NAACP Friday, Oct. 24. She and the university were given the organization’s Community Outreach Award.

The award and others were presented at the organization’s largest event of the year, the 63rd Annual Freedom Fund Banquet, which raises money for NAACP programs and scholarships, and honors organizations and members of the community who enhance the quality of life of all Americans.

“The university is involved with the community on so many fronts, it’s really gratifying to have an organization like the Dayton NAACP notice and acknowledge the impact that we are having,” said Barrett.

Barrett believes Wright State’s on-going and increasingly visible commitment to programs and services that promote diversity and inclusion in the community led to the recognition.

“Our faculty, staff and students’ efforts to enhance educational attainment in communities of color through programs like Upward Bound, our support of initiatives like Welcome Dayton, our tutoring programs that match so many of our students with children in schools across the Dayton area, our anti-gun-violence program and programs like Wright STEPP are proving that we are an active and engaged community partner,” said Barrett.

Barrett added that Wright State’s student chapter of the NAACP and other student groups have also been visibly engaged with the community regarding the controversy over the death of John Crawford III, who was shot and killed by Beavercreek police at a Walmart in August.

Since joining Wright State in 2012, Barrett has sought to provide a concrete avenue for connecting Wright State’s programs and services with community members and partners in an effort to transparently engage with them around issues for all people in the Dayton community.