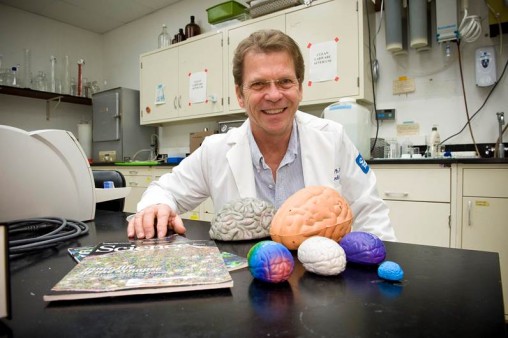 Jim Olson, professor of emergency medicine and neuroscience, cell biology and physiology, has been recognized for his work with Science Olympiad to promote neuroscience education in elementary and high schools around the country.

Neuroscience is beginning to be taught in middle and high schools around the nation through the Science Olympiad program thanks to a Wright State University neuroscientist who has been pushing hard to interest young students in the scientific study of the nervous system.

Jim Olson, Ph.D., professor of emergency medicine and neuroscience, cell biology and physiology, has been honored nationally for his neuroscience education outreach efforts.

“Neuroscience is entering our lives more than we might imagine,” said Olson. “Think about science and law. If somebody has had a traumatic history in their childhood, should we take that into account when they commit a crime? Can we predict what they’re going to do next? How do we know when somebody’s telling the truth?”

Science Olympiad is an elementary, middle and high school team competition in which students compete in earth science, biology, chemistry, physics, engineering and other events. More than 6,700 teams from 50 states compete each year. The 2013 Science Olympiad National Tournament was hosted by Wright State and is currently scheduled to return in 2017.

When Olson began volunteering for Science Olympiad several years ago, he noticed there was no neuroscience competition. So he developed a neuroscience event, tried it out in several Ohio schools and then got it incorporated into the national tournament.

The event includes about 20 stations in which the students either solve neuroscience problems or identify parts of brain specimens.

“The high school students, for example, would have to describe the symptoms of a patient who had a lesion in a designated area of the brain,” Olson said. “We’re really testing at an undergraduate college level.”

Olson went on to connect Science Olympiad with the Society for Neuroscience, a professional organization for basic scientists and physicians whose research is focused on the study of the brain and nervous system. Each year, two Science Olympiad winners are invited to the society’s annual meeting, which attracts 30,000 neuroscientists from around the world and features thousands of presentations.

“It’s just huge,” said Olson. “And that is really stimulating. They get to meet some high-energy people who show them what neuroscience is.”

Olson is the current president of the society’s local chapter, which just won the Chapter-of-the-Year award. His next goal is to get more neuroscientists involved in the Science Olympiad program as event supervisors and coaches.

Last year, Olson was asked to develop a neuroscience workshop for the National Science Teachers Association.

“They were looking for new ways to teach, new activities, different approaches,” he said.

Olson worked with Rochelle Schwartz-Bloom, a professor of pharmacology and cancer biology at Duke University Medical Center and founder and director of the Duke Center for Science Education.

“I did the sensory part,” Olson said. “It involved a little history of neuroscience and how we understand the brain. The brain might look like a bunch of spaghetti with no order to it, but it really is ordered. It’s like a very organized circuit board.”

Olson made a presentation in Boston and then put together a workbook for teachers that is now being used in classrooms.

Olson grew up in Phoenix, taking part in Boy Scout activities and playing bass in a blues band. He studied engineering physics at Cornell University and then got his Ph.D. in biophysics at the University of California-Berkeley in 1978.

He became fascinated with neuroscience after one of his professors began growing live animal brain cells. Olson’s dissertation involved investigating the interaction of light with nerve cells and using lasers to probe biochemical pathways.

He took a post-doctoral fellowship at Stanford University to study the energy metabolism of brain cells, later became a research assistant professor at Tulane University and joined the faculty at Wright State in 1986.

Olson’s current research involves the glial cells of the brain, the cells that maintain the environment for the neurons to work.

“They are exceedingly important in brain function, both in integration of thought, sensory input to motor output and pathology,” he said.

Olson, who has a joint appointment to the Boonshoft School of Medicine and to the College of Science and Mathematics, said he came to Wright State because it had a well-established educational mission and supported him in doing the research he wanted to do.

“What Wright State did was give me freedom to define my own success,” he said. “They provided the resources … and then they helped me achieve my goals.”