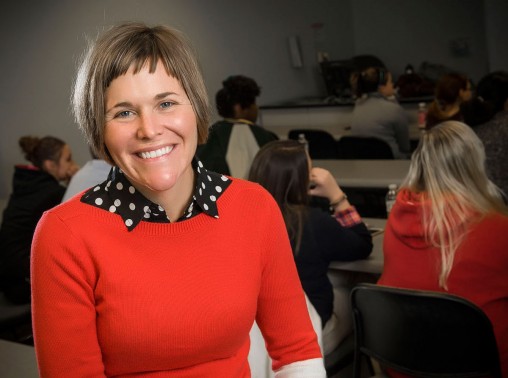 Sally Lamping, associate professor in the Department of English Language and Literatures and director of the undergraduate English: Integrated Language Arts program, will research the Australian education system and how it educates immigrants as a Fulbright Senior Research Scholar next year.

When she was in high school, Sally Lamping wanted to make a difference in other people’s lives. So she convinced her school to organize a trip to a refugee camp in Brownsville, Texas, where she and her classmates taught English and helped refugees and immigrants get acclimated to the United States.

The experience changed her life.

“That’s where I started to grasp the fact that travel allows me to realize I make up such a tiny portion of the globe,” she said. “There are all these other people with all these other struggles and all these things happening that as Americans we often don’t know about.”

She continued to work with immigrants, as a teacher, researcher and Peace Corps volunteer.

Next year, Lamping will spend six months researching the Australian education system and how it educates immigrants as a Fulbright Senior Research Scholar.

Lamping, Ed.D., is an associate professor in Wright State University’s Department of English Language and Literatures and director of the undergraduate English: Integrated Language Arts program, which trains students to be language arts teachers in grades 7–12.

She says the Fulbright scholarship will help her better understand how to train secondary content teachers to implement national standards in culturally and linguistically diverse classrooms. 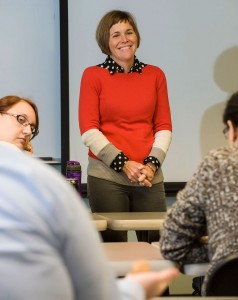 “I hope that it helps me to be a better professor, a better person to train my students because I think that my (Integrated Language Arts) students are some of the best teachers in the United States,” she said. “I would put them up against teachers anywhere.”

She will also examine how teachers in both countries are trained to work in secondary schools with high populations of newcomers and nonnative English speaking students. Australia has recently introduced a new national curriculum, and teachers in that country are trained differently from those in the United States.

“I’m very interested in seeing how their content area teachers are faring with the Australia National Curriculum, especially in Adelaide … because they have seen a recent spike in newcomer populations,” she said.

The Australian government’s policies on immigrants and refugees are also controversial topics in the country, and the government recently said it would restrict access to the country by people seeking asylum.

“It’s kind of an intense environment as far as immigration is concerned there,” Lamping said.

She says she’s excited to work with researchers at the University of South Australia who are studying the country’s immigration policies and immigrant communities.

Throughout her academic career, Lamping has worked with newcomer populations.

After receiving a B.A. in English from the University of Cincinnati, Lamping volunteered with the Peace Corps in Guinea-Bissau in West Africa, teaching English as a foreign language and working on literacy campaigns.

While pursuing her M.A. in English education at Columbia University, Lamping taught citizenship classes at 7 a.m. on Saturdays.

Her first teaching job was as a seventh-grade language arts teacher in Fairfax County, Va. In that first classroom, 24 countries were represented. During that time, she worked nights at Carlos Rosario Public Charter School, a school founded by the Latino community to provide holistic education and services to newcomer adults in Washington, D.C.

Lamping earned an Ed.D. in Urban Educational Leadership from the University of Cincinnati. Her dissertation followed five African men as they transitioned from predominantly oral language backgrounds to a new culture and language based in written literacy.

She’s thankful that the university allows her “to do the things that I love to do,” including supporting her research interests, permitting her to take a sabbatical so she could research and work with Dayton Public Schools’ ESL program, and providing opportunities for her students to work in real classrooms with culturally and linguistically diverse adolescents.

“They seem to see what is best for our students at this university and really get behind supporting faculty who want to do these things,” she said. “I’ve felt very lucky to be in a program like that, and also in a place where my research and my publications can be tied to the work that I get to do in the public schools, and they’re acknowledged as real research. It’s been a great place for me.”

Lamping’s work in Australia will build on research she is conducting in Dayton Public Schools.

That research compares methods of educating different groups of high school students who are nonnative English speakers. One group studies English in a sheltered English immersion program, while another is in a specialized program that provides personalized individualized learning plans. Lamping is also examining the training the students’ teachers receive.