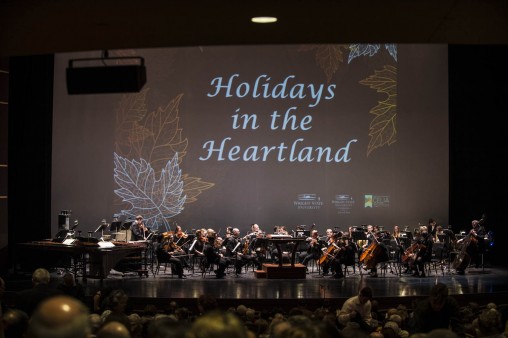 Wright State’s “Holidays in the Heartland” concert, , organized by the School of Music, will be rebroadcast by Dayton Public Radio on Thanksgiving.

Wright State’s popular “Holidays in the Heartland” concert will be rebroadcast by Dayton Public Radio on Thanksgiving, Nov. 27, at 4 p.m.

The concert, organized by the School of Music, can be heard locally on 88.1 FM or 89.9 FM and online at discoverclassical.org.

A Miami Valley tradition for nearly 20 years, “Holidays in the Heartland” was presented Nov. 2 in the Schuster Performing Arts Center in downtown Dayton.

The concert kicked off the holiday season, honored veterans and remembered World War I, as part of “A Long, Long Way: Echoes of the Great War,” a yearlong project organized by Wright State’s Ohio Center of Excellence in Collaborative Education, Leadership and Innovation in the Arts (CELIA).

The centerpiece of “Holidays in the Heartland” was a selection of popular songs and classical music from World War I interspersed with commentary from Paul Lockhart, Ph.D., professor of history and CELIA Senior Fellow.

The concert also included a performance of Maurice Ravel’s “Piano Trio” by music faculty members; Gustav Holst’s “Jupiter, the Bringer of Jollity” by the Wright State Chamber Orchestra; and songs from the American Revolution, the Civil War and the end of the 19th century, as well as patriotic tunes honoring military veterans.

“Holidays in the Heartland” was presented by CELIA, the School of Music and the College of Liberal Arts and sponsored by Dayton Public Radio.