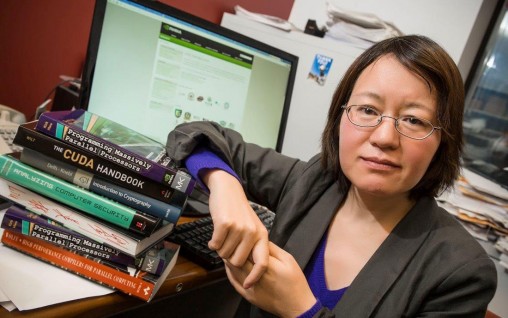 Wright State is among a select group of universities around the globe designated as centers to teach a state-of-the-art computer programming model.

Wright State is among a select group of universities around the globe designated as centers to teach a state-of-the-art computer programming model that has become essential in everything from cancer research to ocean modeling.

Wright State was named a CUDA Teaching Center thanks to Meilin Liu, an associate professor in the College of Engineering and Computer Science. Liu wrote a proposal and submitted it to NVIDIA, the California-based technology company that developed CUDA.

“CUDA is state of the art,” said Liu. “It has a lot more computational computing power, provides more sophisticated graphics and enables the users to solve more complicated problems faster.”

CUDA (Compute Unified Device Architecture) is a parallel computing platform and programming model that enables dramatic increases in computing performance by harnessing the power of the graphics processing unit (GPU).

Since its introduction in 2006, CUDA has been widely deployed through thousands of applications and supported by GPUs in notebooks, workstations, computer clusters and supercomputers. The applications have been used in astronomy, biology, chemistry, physics, data mining, manufacturing, finance and other computationally intense fields.

As a result of being designated a teaching center, Wright State was given access to the CUDA program, provided with textbooks that teach CUDA programming and given some financial assistance to facilitate the teaching.

“NVIDIA is not only encouraging universities to teach CUDA, but to use it to solve real problems,” Liu said. “These skills are indispensable for students to successfully conduct research in the high-performance computing systems and do parallel programming in the real world. A lot of people are trying to learn it.” 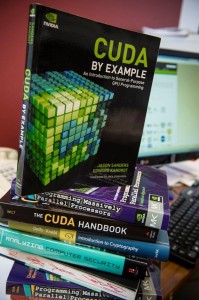 By learning CUDA programming, Wright State students can conduct research in the high-performance computing systems and do parallel programming in the real world.

At first, CUDA was used to produce higher quality and more accurate computer images that could be used in such things as biomedical molecular analysis or reconstruction of magnetic resonance imaging. Then it was used to solve complex computational problems and as a powerful sorting engine to quickly identify relevant information on the Web.

CUDA is currently being used for such things as analyzing air traffic flow, identifying hidden plaque in arteries and recording brain activity.

Liu’s most recent class had 14 students, some of whom work at local companies.

“This is not an easy class; the workload is heavy,” she said. “You need to know the heart of the architecture, the processor core. If you don’t write a parallel computer program correctly, it might run slower than a sequential program.”

Liu said many of her students will likely get jobs at nearby Wright-Patterson Air Force Base, with associated research labs or with defense contractors. In fact, officials at Wright-Patterson have already asked her to recommend a student who has mastered CUDA.

“The base and its research labs have increasing demands of the workforce for high-performance and real-time computations in the image processing of unmanned aerial vehicles, computational fluid dynamics and other cyber physical systems,” she said.