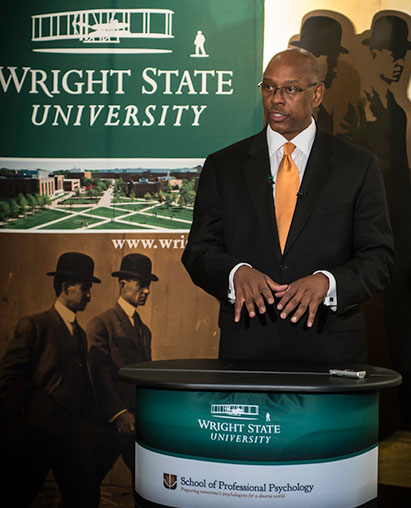 Cedric Alexander, a 1997 graduate of Wright State’s School of Professional Psychology, was selected by President Obama to serve on a White House task force to study ways to improve community policing.

Alexander was named to the Task Force on 21st Century Policing, which will examine how to strengthen public trust and build strong relationships between law enforcement and the communities they protect while promoting crime reduction.

Alexander, director of public safety in DeKalb County, Ga., is a 1997 graduate of Wright State’s School of Professional Psychology.

He spoke at the school’s convocation on Aug. 22, fresh from a visit to riot-scarred Ferguson, Mo., to help ease racial tensions there.

Alexander started his policing career in 1977. After receiving his doctorate in psychology from Wright State — where he did his dissertation on police stress and burnout — he went on to the University of Rochester Medical Center, doing clinical work and serving on the faculty. He later served as federal security director for the Dallas/Fort Worth International Airport.

Alexander became a key peacemaker in Ferguson, which was rocked with civil unrest after an African-American teenager was shot and killed by a white police officer. Alexander traveled to Ferguson on Aug. 16 and spent two days there, meeting with community leaders and Ferguson Police Chief Thomas Jackson.

On Dec. 9, Alexander testified before the U.S. Senate Judiciary Subcommittee on Constitution, Civil Rights & Human Rights. He said cultural competency is a critical component to bridging the gap between law enforcement and communities of color.

“To understand the needs of culturally diverse groups, it is critical that law enforcement re-evaluates its training methodologies to ensure that they reflect the 21st century needs and incorporate cultural-competency training for police officers that is part of the recruiting and in-service training,” Alexander said.

The panel will engage with federal, state, tribal and local officials; technical advisers; young leaders; and nongovernmental organizations to provide a transparent process to engage with the public.

It will also hold listening sessions to hear testimony and recommendations from invited witnesses and the public. The first session will be held in Washington, D.C., in mid-January. The task force’s initial report and recommendations will be presented to the president in March.