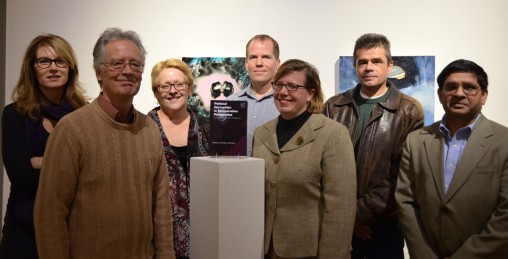 The College of Liberal Arts will recognize faculty who published books and albums in 2014 with a reception on Jan. 26. This photo pictures some of the faculty who attended last year’s event.

An analysis of Middle Eastern affairs, a look at the desperation and despair in a slum of wartime China through the lens of the police, a Wright State born textbook and primers on playing the flute, oboe and bassoon are among recent publications written by faculty in Wright State’s College of Liberal Arts.

The 13 authors, who have 15 publications to their names, will be recognized in the Stein Galleries in the Creative Arts Center on Monday, Jan. 26, from 4 to 5:30 p.m. This event is open to the public, and authors will be available with their publications for questions.

The faculty members’ publications range from books to an album.

“My favorite part is hearing each author talk about their book. COLA is really proud of the breadth and depth of our faculty’s interests, research and expertise,” said Stephanie Dickey, the COLA administrative coordinator.

It describes the individuals who called the Garden home in 1941. The book looks at what police found in their 300-page report of the slum in the city of Harbin, a major economic and transportation center in the Japanese puppet-state Manchukuo in China “Manchuria attracted migrants from China and Korea to work in factories, mines and agriculture,” Meyer wrote.

Many newcomers found unemployment, drug addiction and despair. Their last refuge was a flophouse complex called the Garden of Grand Vision, which offered a rough measure of shelter. In spite of poverty and desolation, “the residents of the Garden created vibrant underground which included the flophouses, food shops, unlicensed heroin and gambling operations and organized pilfering and begging teams. There were fortune tellers, a barber, a watch repair shop, and a magazine seller located within the Garden’s walls,” Meyer said.

She located the police report in the Tokyo National Diet Library as she was researching for her first book, “Webs of Smoke.” Meyer, who spent 10 years completing the book, traveled to archives in Harbin and Dalian in China and Tokyo.

Another author who will be recognized is Richard Bullock, professor of English language and literatures, who wrote the third edition of his “Norton Field Guide to Writing,” a widely used college writing textbook. Bullock also recently published “The Little Seagull Handbook,” which he described as “a small writing handbook for use in first-year college writing courses.”

“‘The Little Seagull’ is really a condensed version of ‘The Norton Field Guide to Writing,’” Bullock said.

Bullock revised some chapters as many as 15 times before he and his editor were satisfied. He said his biggest challenge was making sure he had enough research to ensure the advice in each chapter was accurate and clear. Readers can find his book in the Wright State Bookstore and on Amazon.com.

Jagow said the books were written “with the goal of providing the intermediate-level player with appropriate literature to continue their development as a technically proficient and musically expressive artist performer.”

She spent one year writing and editing these pieces. Her biggest challenge was identifying appropriate literature within the public domain that would both challenge and motivate intermediate-level players and inputting the notations into a software program.

Liam Anderson, a professor in the Department of Political Science, published his book, “An Atlas of Middle Eastern Affairs.” Anderson said that his book is an analysis of the major political, economic and geographic issues facing the Middle East today, illustrated with relevant maps.

Anderson researched the situation in Iraq, specifically the position of the Kurds within new Iraqi political order. He has done broad work on how ethnic groups can be accommodated within democratic systems.

Faculty members often request a professional development leave, which allows them to take off one to two semesters to focus on professional research on a specific topic. Within that time, these individuals often create publications.

For individuals wanting to write and publish a book, COLA authors share personal advice and motivation:

“You must have a passion for the topic. … One must also stay extremely focused. It is very easy, for me anyway, to ‘see a squirrel’ and want to run off in another direction or add too much to the book at hand,” said Jagow.

Anderson encourages writers to find a publisher before writing rather than assuming a publisher will pick up the story later.

Meyer advises people writing nonfiction to research archives for unknown documents and follow it to its source and environment. “In other words, who wrote it, for whom, and under what conditions,” she said. She encourages writers of related topics to write in the active voice.

Bullock encourages writers to be “patient and know that writing a book or textbook is a years-long commitment; find the best editor for your field and be willing to heed his or her advice and remember those 15 revisions before you sign a contract.”