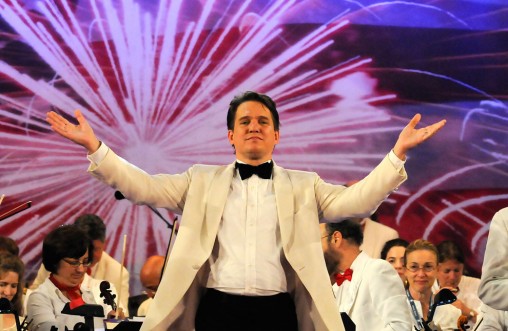 Read about the master classes and “War Requiem” performances >>

During his tenure with the Boston Pops, he has conducted over 1,500 concerts and made 74 television shows, including 38 new programs for PBS’ “Evening at Pops” and an annual Fourth of July concert. He has led the Boston Pops on 38 national tours, four overseas tours of Japan and Korea and performances at Carnegie Hall and Radio City Music Hall. In 2004, the Pops appeared live on national television with Elton John during the NFL season kickoff special, and in February 2002, Lockhart led the Boston Pops in the pregame show of Super Bowl XXXVI in New Orleans.

He and the Boston Pops have released five self-produced recordings, including “A Boston Pops Christmas: Live from Symphony Hall” in 2013, and eight albums with RCA Victor.

As the seventh principal conductor of the BBC Concert Orchestra, Lockhart has led the orchestra on two critically acclaimed North American tours, conducted annual performances at The Proms and celebrated its 60th year in 2012. Lockhart and the orchestra are touring North America in the 2014-2015 season with pianist Charlie Albright.

Since 2007, he also has served as artistic director of the Brevard Music Center Summer Institute and Festival, a leading summer institute for gifted young musicians. Lockhart attended the center as a teenager in 1974 and 1975.

Lockhart was the 2006 recipient of the Bob Hope Patriot Award from the Congressional Medal of Honor Society.

He has conducted nearly every major orchestra in North America, as well as the Royal Concertgebouw Orchestra, the Deutsches Symphonie-Orchester Berlin, the NHK Symphony in Tokyo and the Melbourne Symphony Orchestra. He has also conducted the London Philharmonic in Royal Albert Hall and productions with the Atlanta Opera, Washington Opera, Boston Lyric Opera and Utah Opera.

During his tenure as music director of the Utah Symphony from 1998 to 2009, he led the orchestra through the complete symphonic works of Gustav Mahler and brought them to Europe on tour for the first time in two decades. He also helped lead the organization’s merger with the Utah Opera.

Lockhart served as music director of the Cincinnati Chamber Orchestra for seven years, completing his tenure in 1999. During his leadership, the orchestra doubled its number of performances, released recordings and developed a reputation for innovative and accessible programming. He also served as associate conductor of both the Cincinnati Symphony Orchestra and the Cincinnati Pops Orchestra from 1990 to 1995.