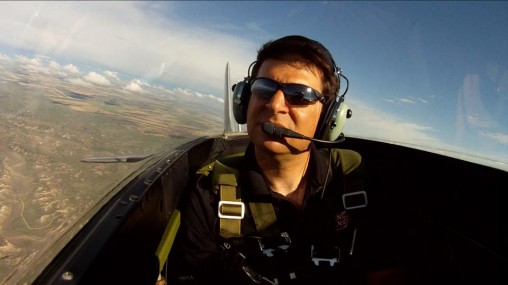 Adam White, a 1995 Wright State graduate and aviation filmmaker, will give the keynote address at the Public History Graduate Symposium “History Through a Prism: Untold Stories” on March 13. He is pictured filming onboard a P-51 Mustang for the Texas Flying Legends Museum.

Adam White, a Wright State University graduate who has created films about the Tuskegee Airmen and the Doolittle Tokyo Raiders, will deliver the keynote address at the Wright State Public History Graduate Symposium.

The symposium takes place from 9 a.m. to 4 p.m. in the Student Union Apollo Room.

Although the symposium is free, registration is required. RSVP by calling the Wright State University Archives at (937) 775-2092 or signing up online. The deadline to register is March 6.

This year’s symposium will explore “History Through a Prism: Untold Stories.”

Stories that are not well known contain lessons that can help us prepare better for the future, said Dawne Dewey, head of Wright State’s Special Collections and Archives and director of the Public History program.

“The history of our community and our state and region and nation and world is so diverse and there are so many amazing stories about ordinary people doing extraordinary things, that can teach us lessons about our past,” she said. “We can make better decisions if we know what’s gone before.”

White, who graduated from Wright State in 1995 with a B.F.A. in motion pictures, will discuss his experience using film to retell history. For the last 12 years White has focused on creating documentaries about aviation and history.

Attracted to aviation and older airplanes, White said he realized interesting stories about those aircraft and their pilots were going untold.

“I have an affinity for having a story unfold that displays that grand moment of history,” he said. “I really, really enjoy that. Whether it be the Tuskegee Airmen being able to enter into service for their country, or if it’s with Dick Cole being able to talk to us about what it was like to take off in the front of the Hornet during the Doolittle Raid, we have the opportunity to talk with these people. And because of that privilege we have as duty to tell that story as best we could.”

White has won multiple regional Emmy Awards for his films “Red Tail Reborn,” about the Tuskegee Airmen, “The Restorers,” about people who restore warbirds and antique aircraft, and an Emmy for Cinematography for the PBS documentary “Generations: Cuyahoga Valley National Park.” White and his company Hemlock Films received the rare “Special Achievement” award from the International Council of Airshows in 2011 for “Rise Above.”

Currently, White and Hemlock Films are working to release their new series “The Restorers,” which expands on the original film of the same name. He also producing the new PBS documentary “Beyond the Powder” about the first women’s cross-country air race in 1929.

With over 25 years of experience as a freelancer, White has also worked on most every type of media in various roles, including directing and cinematography.

The Public History Graduate Symposium will also feature student presentations on topics and histories that are not well known, including some from Dayton.

James McKinnon will present on “The AIDS Memorial Quilt” as a method of teaching history. Jessica Sells will discuss her research into her family circus that helped create a community outside of Columbus, while Adam Becker will present on the Sachs-Pruden Brewing Company, which his ancestors founded in Dayton in the late 1890s. Jonathan Curtis will discuss the old Hog Bottom neighborhood in Dayton off Nicholas Road.

“Dayton has such a diverse history, so many interesting stories, and those stories need to be told,” Dewey said.