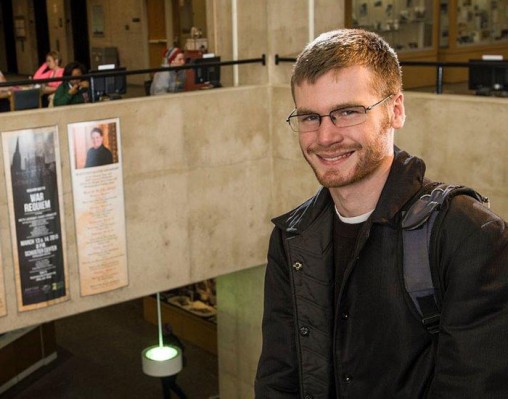 Wright State philosophy/religion major John Klugh is a soldier in Ahimsa’s Army, the university’s peace and nonviolence club, which he helped found two years ago.

He’s in the Army, but not the one you might think.

Wright State philosophy/religion major John Klugh is a soldier in Ahimsa’s Army, the university’s peace and nonviolence club. In fact, he helped found it two years ago.

Ahimsa is a Sanskrit term for nonviolence.

“We go out and try to make peace and do activism and raise awareness and help people,” Klugh said.

Peace is not his only passion.

Klugh also helped organize an event called Homeless for the Homeless. Students camped out on the campus Quad all day to raise awareness and money for the university’s Friendship Food Pantry.

The food pantry, which opened in 2011, provides students in need with 48 hours’ worth of emergency meals and student parents with formula, wipes and diapers. Food pantry volunteers also refer students to community programs that provide longer-term food assistance and help with other needs.

Klugh says the issue of poverty has always been important to him.

“I like to help the homeless and people who don’t have a chance to make it on their own and feel rejected,” he said. “I think that is a big cause of violence. People feel desperate so they go to extreme measures to do things.”

Klugh recently began living with a group of Hutterites in the western Ohio village of Casstown. An ethno-religious group known as the plain people, the Hutterites believe in living in a community of goods and absolute pacificism.

Klugh grew up in the village of Centerburg, recognized as the geographic center of Ohio. Its name comes from it being the midway tavern site at the crossroads of an early stagecoach line between Columbus and Mount Vernon. 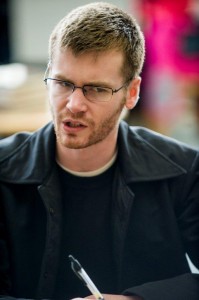 John Klugh, who wants to teach philosophy at the college level, was drawn to Wright State by its philosophy program and the ability to interact with his professors.

In Centerburg, Klugh was active in Boy Scouts and the church, which sparked his interest in studying Christianity and other religions.

“Both religion and philosophy are hugely influential at shaping the whole world,” he said. “To me, it’s important.”

“It enables me to examine my own beliefs, have a firmer understanding of what I believe and understand how people come to ideas,” he said.

“He was kind of in his own place, didn’t have much influence, started his own thing and started a whole new area of philosophy,” said Klugh. “A lot of his teachings have been very influential on modern-day Christians. He talks a lot about faith, about how faith is more important than reason.”

Entertaining to study is Friedrich Nietzsche, a German philosopher, cultural critic, poet and composer who wrote about atheism.

“He’s kind of offensive, but very smart,” said Klugh. “He strikes a chord with you.”

Klugh was drawn to Wright State by its strong philosophy program and the ability to have close personal interaction with the professors.

“Being able to share a love of philosophy with a person with the same excitement and who is an expert is a very special thing,” he said. “It’s not really something I could get anywhere else.”

Klugh eventually wants to teach philosophy at the college level.