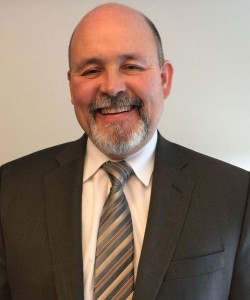 Jeffrey Cooper, who earned bachelor’s (1985) and master’s (1988) degrees in biological sciences from Wright State, is the new health commissioner for Dayton and Montgomery County.

Curbing drug overdoses and putting the brakes on a flu epidemic are among the goals of Jeffrey A. Cooper, a Wright State graduate who has taken the reigns as the new health commissioner for Public Health – Dayton and Montgomery County.

Cooper and his team are on a mission to improve heath outcomes among the more than 534,000 individuals in the county. But they cannot do it alone.

Community partnerships, such as those with Wright State University and its Boonshoft School of Medicine, are crucial to meeting the needs of all those residing here.

“We recognize that many individuals face barriers to good health so our vision is to continue to work with our many community partners to make sure that we are offering programs and services to our residents to help them become healthier,” Cooper said.

Barriers may include safety, lack of transportations or access to healthy foods.

Earning both bachelor’s and master’s degrees in biological sciences from Wright State gave Cooper a strong science foundation and a sense of discovery that have helped him shine during his 24-year public health career.

Most recently, he served as the assistant to the health commissioner and also has served as the emergency preparedness coordinator and in air pollution control.

Wright State is an invaluable partner in Montgomery County’s local public health system, Cooper said. “We are linked in so many ways,” he said.

For example, the Public Health department has partnered with Wright State’s Center for Global Health for many years regarding epidemiological support and services.

“Dr. Sara Paton has been an invaluable resource and friend regarding analyzing the data to assess the health status of Montgomery County residents,” said Cooper.

In addition, the Center for Interventions, Treatment and Addictions Research in the Boonshoft School of Medicine’s Department of Community Health has established a poisoning death review process to reduce the number of unintentional drug overdose deaths in the community.

Cooper feels it is very important for health departments to stay linked with institutions of higher learning, not just for programmatic support and engagement, but also in providing and serving as a resource for students to learn about public health.

As an adjunct professor at Wright State, Cooper taught classes in air pollution control and emergency preparedness to prepare the next generation of public health professionals to shine.

A lifelong resident of the Dayton area, Cooper has a passion for helping people in the region. He attended grade school in Dayton before graduating from Beavercreek High School and Wright State.

Looking back on his accomplishments, Cooper is particularly proud of the Public Health department and community’s response to the 2009 H1N1 influenza pandemic, as well as current efforts to obtain national public health accreditation.

“These engage all our employees,” he said. “It truly is a team effort to achieve our goals.”

“He has tremendous expertise and experience in public health and works tirelessly at his job,” Paton said of Cooper. “On top of that he is one of the nicest people I know.”