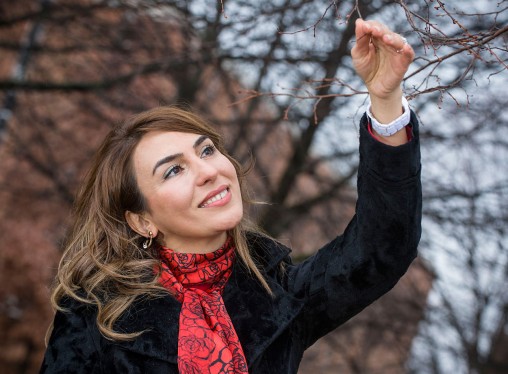 Fahimeh Fallahi and other Iranian students at Wright State will celebrate the Persian New Year during a coffee hour hosted by the University Center of International Education on March 27.

Wright State students can celebrate the Iranian New Year during a coffee hour hosted by the University Center of International Education (UCIE).

The celebration takes place Friday, March 27, from 3 to 5 p.m. in the UCIE conference room, E-190 Student Union. It is free and open to students.

The coffee hour will give students an opportunity to learn about the Iranian culture through traditional food, drinks, decorations and dancing.

“I want people to keep the culture not just in Iran but here too,” said Fahimeh Fallahi, an Iranian environmental sciences graduate student at Wright State.

The Persian New Year, Nowruz, means “new day. It marks the beginning of spring or the Vernal Equinox, according to the Persian calendar, and lasts for 13 days.

“Usually the exact day of New Year is March 20 or 21 of each year. The celebration of Nowruz … reflects the renewal of the Earth,” Fallahi said.

“The Nowruz holiday embodies an ancient tradition that focus on the promise of the New Year and the importance of being with friends and family. Respect for Iran’s cultural history and family were certainly just a few of the things I witnessed during my travels,” said Jonathon Henderson, director of international student support services and programs in UCIE. 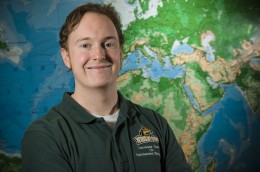 Jonathon Henderson is director of international student support services and programs in the University Center of International Education.

He described Persian food and dancing as both being tasty and colorful.

There are many traditions that take place not only throughout the 13 days but also in preparation for the holiday.

As a prelude to Nowruz, Fallahi said it is tradition for people to gather and jump over bonfires while saying a phrase. Saying a phrase to the fire will take away sickness and problems from the previous year in exchange for energy and warmth in the New Year.

Families also clean their house a month to prepare to host family and friends for Nowruz and to buy new clothing or furniture for the family to welcome in the New Year.

The tradition of Ghashogh Zani is similar to Halloween in the United States, Fallahi said. Children cover their faces and bang pots with spoons to clear away bad luck and are offered treats.

“The most iconic perhaps is the setup of the Sofre haft-seen or ‘table of seven S’s.’ Each ‘s’ represents a different item (that begins with an ‘s’ in Persian) that in turn represent a different virtue for the New Year,” said Henderson.

Similar to waiting for the New Years through countdown in America, Iranians wait together for the New Year to begin. They then exchange wishes, and the eldest in the family gives out sweets to everyone and money to children as a gift, called Eidi.

On Sizdeh Bedar, the 13 day after Nowruz, families pack a special picnic and eat, sing and dance with other friends and family at a local park.

“At the park, sabzeh (wheat grass) that was kept for 13 days are thrown on the ground or in a river to symbolize the return of the plant to nature,” Fallahi said.

She said that singles tie the sabzeh into a knot and throw it in a river as a wish for marriage in the New Year.

UCIE will host the 31st annual International Friendship Affair on Sunday, April 19, 1-5 p.m. in the Student Union Apollo Room. The theme of this year’s event is “Movies around the World.”