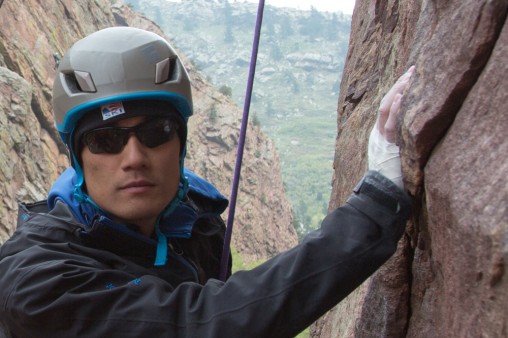 Steve Baskis, a blind veteran, adventurer and advocate for disability awareness, will deliver a Presidential Lecture at Wright State on April 16.

Steve Baskis, a blind veteran, adventurer and advocate for disability awareness, will deliver a Presidential Lecture at Wright State University on Thursday, April 16.

Baskis’ talk begins at 7 p.m. in the Apollo Room in the Student Union. It will be preceded by a public reception at 5:30 p.m. in E156 Student Union. Both events are free and open to the public.

The lecture is cosponsored by the Veteran and Military Center (VMC) and the Office of Disability Services. 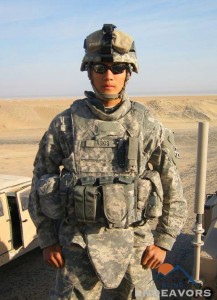 As a soldier in the U.S. Amy’s 4th Infantry Division, Steve Baskis lost his eyesight when his squad was attacked with a roadside bomb while on combat patrol in Iraq.

As a soldier in the U.S. Amy’s 4th Infantry Division, Steve Baskis served in Iraq for eight months. In 2008, he lost his eyesight and suffered other injuries when his squad was attacked with a roadside bomb while on combat patrol.

Since then he has climbed mountains, tried out for the Paralympics, navigated whitewater rapids on the Yellowstone River and participated in Nordic skiing, biathlons, marathons, triathlons and scuba diving.

Baskis says he hopes he can inspire others.

“I do not find my injury as severe as some would say,” he said. “There is always something you can do, and it is up to you to find that internal drive to move forward. Never dwell on the negative, drive forward as fast and as hard as you can. If you are capable of that, there is nothing that will hold you back.”

Baskis has climbed with the first U.S., Canada and Mexico blind team to the top of the eighth tallest peak in North America. He has also climbed or attempted to climb Mount Kilimanjaro in Africa, Russia’s Mount Elbrus, a Mexican volcano, a 14,000-foot Rocky Mountain peak and Colorado’s Bastille Crack.

He is currently working to join the U.S. Paralympics cycling team with the goal of competing in the 2016 games.

Baskis is also the founder of Blind Endeavors, which he originally started to give him a platform to share his story and has expanded as a venue to share others’ stories as well.

Baskis’ talk will be preceded by a video and speaker series on post-traumatic stress disorder (PTSD).

The series includes “Restrepo,” a documentary on the Afghanistan war, on Thursday, April 2, and “High Ground” on Wednesday, April 8. Both movies will begin at 6 p.m. in 120 Medical Sciences. A reception will be held prior to each screening at 5 p.m.

“High Ground” documents a group of disabled veterans — including Baskis — who climbed 20,000-foot Mount Lobuche in the Himalayas.

The April 8 screening will be followed by a panel discussion with veterans who will discuss their experiences at Wright State and how PTSD has affected them.

Jonathan Granata, the VMC community engagement coordinator and a senior majoring in organizational leadership, said the goal of the series is to raise awareness about PTSD and its effects on student veterans with faculty, staff and students, as well as the community.

He said “Restrepo” explores how individuals get PTSD from combat, while “High Ground” documents how they cope and overcome it.

The series is hosted by the Wright State Veteran’s League and sponsored by the VMC, the President’s Office and the Department of Leadership Studies.