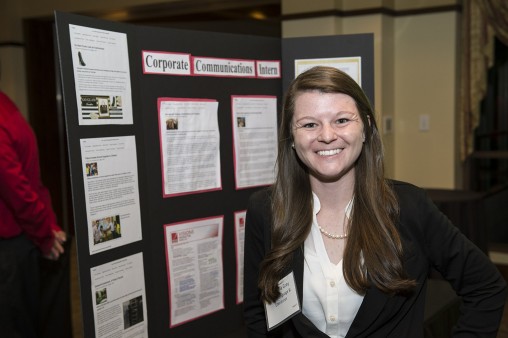 Alexandria Gray, an English major focusing on professional writing, was one of the students who participated in the College of Liberal Arts Internship Breakfast Celebration.

From the English language and literatures major to criminal justice, students in Wright State’s College of Liberal Arts (COLA) participated in the college’s Internship Breakfast Celebration recognizing the successful relationship of students and business partners through internship experiences.

The breakfast serves as a thank you to community partners, said Jennifer Buckwalter, assistant dean for community and student engagement in COLA.

“We recognize it’s a lot of work to accommodate our students so we want to thank them because they didn’t have to do this. It was a choice,” she said.

Internships provide students with real-world opportunities to apply what they are learning in the classroom, Buckwalter said.

“Student have to engage and reflect and process on the skills they’ve acquired, and what they’ve learned about leadership, communication, networking, research and so much more,” she said. “Internships help our students get their foot in the door and often times lead to future employment opportunities.”

Over 235 COLA students participated in internships from summer 2014 through spring 2015, accumulating more than 56,000 hours of work.

Eleven students spoke about their internship experiences during an exhibition at the breakfast. Students represented various majors from international and comparative politics to English language and literatures to anthropology.

Tyler Heneghan, an anthropology major, works at the Dayton Society of Natural History with the Boonshoft Museum of Discovery. He assists in locating artifacts, including projectile points, or arrowheads, at the SunWatch Indian Village. He has found three projectile points out of the 400 that have been discovered at the site so far.

He said internship experience helped him win a fellowship known as the “NSF Research Experience for Undergraduates.” The research fellowship enables him to work with faculty at partner institutions on an independent project.

Speaking of his time at SunWatch, Heneghan said, “There’s nothing quite like it in the U.S.;  it’s one of the only places where we’re investigating prehistoric architecture.” 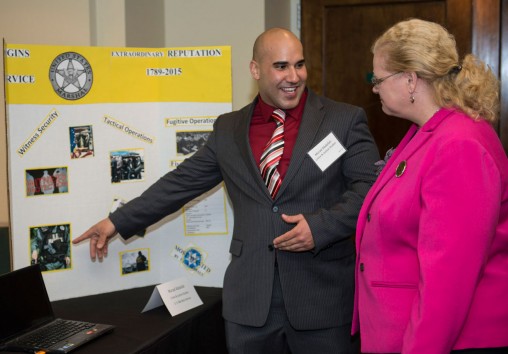 Murad Abdallah, a crime and justice major, discussed his internship with the U.S. Marshal Service with College of Liberal Arts Dean Kristin Sobolik.

Murad Abdallah, who is trilingual, is majoring in crime and justice and has much experience within the workforce. He served an internship with U.S. Marshal Service.

“[Law enforcement] is never boring, and you’re always doing something that matters, such as protecting the people I love,” said Abdallah.

Student Alexandria Gray interns at ACCO Brands, where she writes articles for the company’s internal website. Additionally, Gray produces a newsletter for the company’s New York location and is this year’s City of Hope Campaign fundraising coordinator for the Kettering facility.

“It’s given me a lot of writing and editing experience, and I’ve gained communication skills. … COLA has been encouraging, and my classes have prepared me for a yearlong internship,” Gray said.

Taylor McKinley, an English major, spoke to the audience about how much she benefited from her internship at Civitas Media.

Watch this video to learn more about internship opportunities in the College of Liberal Arts.