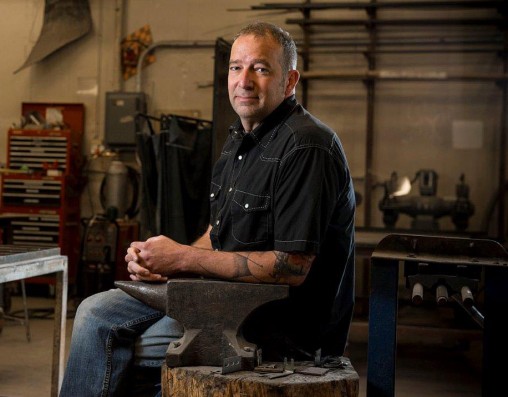 Landon Crowell lovingly cares for the tools needed to make art in Wright State’s Fine Arts Building while pursuing his own career as an accomplished sculptor.

The earthy smell of clay, scratchy sound of sandpaper and soft strains of country rock greet visitors. There are rows of orange acetylene tanks and olive green welding masks. There are table saws, stonecutters, stacks of well-worn work gloves and even an anvil.

This is Wright State University’s Fine Arts Building. And for Landon Crowell — who lovingly cares for the tools of artmaking — it is his world.

“I maintain the studio, keep the equipment running,” said Crowell, fine-arts technician in the Department of Art and Art History. “And I keep my skills polished so that I can teach the students how to do things safely and make the artwork look good. The quality of the tools definitely affects the quality of the art.”

Crowell should know. He himself is an accomplished sculptor. His latest exhibition, “Constructed Landscapes,” concluded earlier this month at the Rosewood Arts Centre in Kettering.

“I use beeswax and tar and wood and construction-type materials,” he said. “Most of it is based on the landscapes of the West.”

Crowell spent the past year preparing for the show.

“A lot of people don’t understand that art is hard work,” he said. “It is a lot of hours.”

On this day, Crowell is wearing a black, short-sleeve, Western-style shirt that reveals arms tattooed with his drawings, one based on the work of surrealist painter Joan Miró.

The Dayton Visual Arts Center, one of the region’s leading contemporary gallery spaces and artists’ organizations, recently called Crowell one of eight promising Dayton artists “to keep an eye on.”

And the Corner Kitchen, a bistro that will soon open in Dayton’s Oregon District, will feature Crowell’s artwork. The work, which Crowell calls “really raw,” will match the reclaimed wood and rough steel inside the bistro.

Crowell grew up in Dayton, but family trips gave him a love of the western United States.

“I still have my heart out there,” he said. 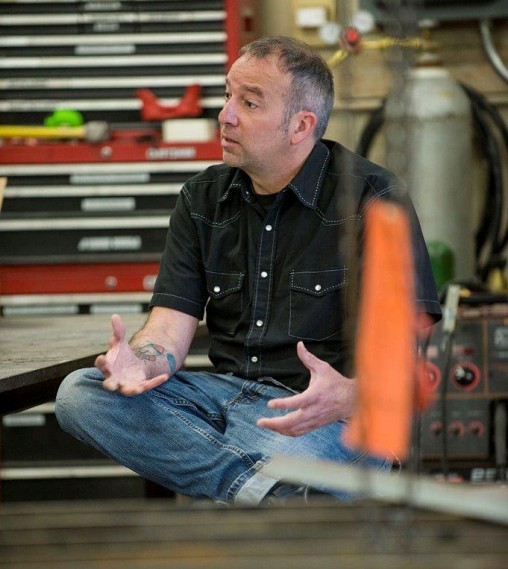 The Dayton Visual Arts Center called Landon Crowell, who received his B.F.A. from Wright State, one of eight promising Dayton artists “to keep an eye on.”

Crowell became interested in drawing at Dayton Christian High School because his teacher said he had talent. After graduating, he pursued art classes in college.

“I enjoyed it and felt like I fit in,” he said. “I was a free-thinker, a nonconformist. And I was just trying to survive college with a learning disability. It was work.”

Crowell received a full-ride track and cross-country scholarship to the University of Akron, but left before finishing his degree.

During the summers, he worked as a mountain guide at Yosemite National Park in California, where he once had an up-close visit from a brown bear “the size of a Volkswagen.”

“I see something in my head and I feel this need to make it,” he said. “It’s probably like an engineer. They see this part in their head, and it drives them to make that part. I see this image or this shape.”

He later moved to Springfield, Vt., where he worked at a production ceramics studio and also assisted Kenneth Noland, one of the best-known painters of Color Field, a style of abstract painting inspired by European modernism.

Crowell returned to Dayton and enrolled at Wright State, where in 2002 he got his bachelor of fine arts degree in sculpture.

“I loved going to Wright State,” he said. “Disability Services helped me out a lot. It’s always been a struggle for me to read and write in a fast-paced academic setting.”

His job and his artwork take up most of Crowell’s time. But he has dreams.

“I’d like to be better known as an artist, show more,” he said.