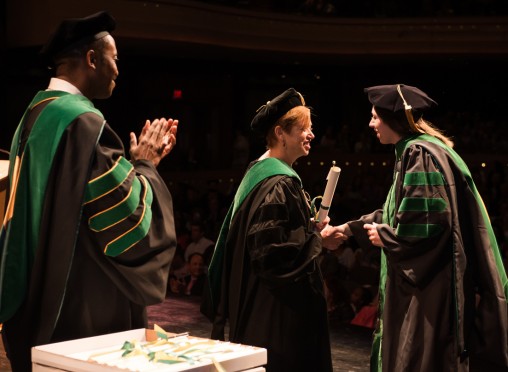 Margaret Dunn, dean of the Boonshoft School of Medicine, presented a graduate with a diploma, as Associate Dean Gary LeRoy applauded, during the medical school’s graduation ceremony May 22.

After four or more years of intense study and specialized training, 95 medical students of the Wright State University Boonshoft School of Medicine class of 2015 received their M.D. degrees during the school’s commencement ceremony at the Benjamin and Marian Schuster Performing Arts Center on Friday, May 22.

In July, the graduates will begin prestigious residencies and receive advanced training in the medical specialties of their choice. The new physicians will enter outstanding residency training programs in Dayton, throughout Ohio and nationwide, including Case Western Reserve University, Duke University, Stanford University, Cambridge Health Alliance (Harvard) and Johns Hopkins Hospital. See all the residency results at medicine.wright.edu/match. 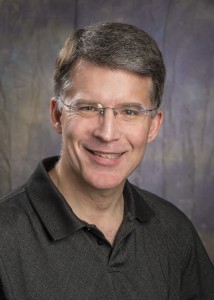 John F. Donnelly, professor of family medicine and associate professor of community health at the Boonshoft School of Medicine, delivered the commencement address.

Each year the graduating class presents an Appreciation Award to recognize an individual or organization that has made a significant contribution to the Boonshoft School of Medicine. The class of 2015 honored Robert E. W. Fyffe, Ph.D., vice president for research and dean of The Graduate School and professor of neuroscience, cell biology and physiology, for his exceptional leadership in support of students and medical education.

Fyffe served as associate dean for research affairs at the Boonshoft School of Medicine from 2001 to 2012, having joined the faculty as an associate professor in 1992. His research on spinal cord circuits has been supported by the National Institutes of Health for more than 25 years. He has trained many graduate and medical students, including students pursuing the M.D./Ph.D. degree at Wright State, and was a strong advocate for establishing the Medical Student Research Club.

Margaret M. Dunn, M.D., M.B.A., dean of the medical school, presented the Dean’s Award to graduating student Augustine Hong, for demonstrating a commitment to academic excellence, embodying empathy and compassion toward others, exemplifying personal integrity and professionalism and earning the respect and trust of classmates and faculty. 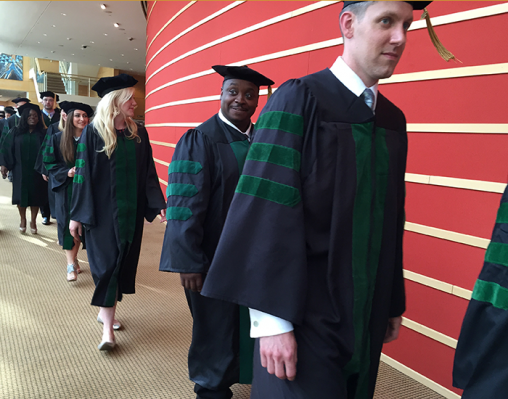 The Boonshoft School of Medicine’s commencement ceremony included the presentation of numerous awards to graduates and faculty.

The Teaching Excellence Award was presented to Karen Kirkham, M.D., associate professor, internal medicine, who was selected by the class of 2015 as the faculty member displaying outstanding professional skill and pride in discharging her instructional duties.

The Leonard Tow Humanism in Medicine Award was presented by The Arnold P. Gold Foundation to graduate Jeffrey S. Zabinski and to faculty member Larry Lawhorne, M.D., professor and chair of the Department of Geriatrics and professor of family medicine, for consistently demonstrating compassion and empathy in the delivery of care to patients.

The American Medical Women’s Association Glasgow-Rubin Citation for Academic Achievement was given to Katie M. Flower and Audra L. Horomanski, who graduated in the top 10 percent of the class.

The Glenn C. Hamilton, M.D., Excellence in Emergency Medicine Award was given to Chloe Sidley, recognizing interest and accomplishment in emergency medicine.

The Society for Academic Emergency Medicine Award was given to Joshua N. Klepinger, the graduate who demonstrated outstanding proficiency in emergency medicine.

The Walbroehl Award for Family Medicine was given to Jay G. Ingram, for excellence in family medicine.

The Homer Cassel, M.D., Award was presented by the Dayton Society of Internal Medicine in honor of the late Dr. Homer D. Cassel, to Brian V. Dinh, for outstanding scholarship and commitment to the specialty of internal medicine.

The Department of Pediatrics Award was given to Charles N. Spear, for commitment to a career in pediatrics and outstanding performance in pediatrics during the clinical years.

The Department of Psychiatry Outstanding Senior Student Award was presented to Samantha Imfeld.

The Dan W. Elliott, M.D., Award was presented to Nicholas A. Moore, for commitment to a career in surgery and outstanding performance in surgery during the clinical years.

The Reach Out of Montgomery County Student Volunteer Appreciation Award was given to Matt Huang and Chloe Sidley.

The Global Service Award was presented to Jodi L. Mrosko, for having a history of volunteering and rotating in a medically underserved area internationally.

The Merck Manual Awards (Merck Company) were presented to Nicholas A. Moore and Jock N. Taylor, for exemplifying scholastic achievement in medical studies.

The 2015 Excellence in Public Health Award was given to Betty J. Cheney.

The John Worthman, M.D., Award was presented to Tracy Fong, for entering into the Wright State University Family Medicine Residency.