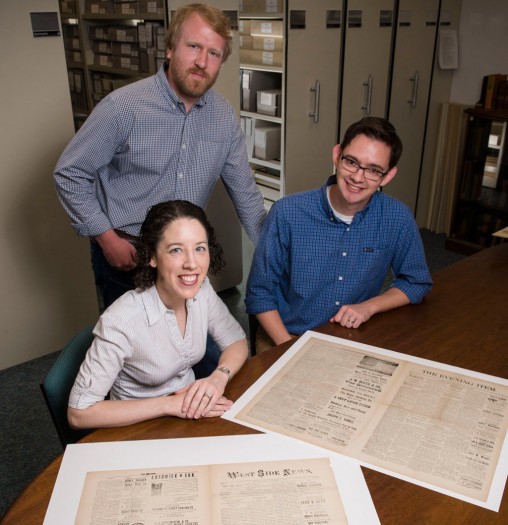 Lisa Rickey from Wright State’s Special Collections and Archives and Ryan O’Grady, back, and Andrew Harris from Digital Services helped create a searchable online archive of the most complete run of newspapers published by the Wright brothers available to date.

Dayton history lovers and Wright brothers enthusiasts have a new online source of information to dig in to.

Special Collections and Archives in the Wright State University Libraries and the Dayton Metro Library have partnered to create an online archive of the most complete run of Wright brothers newspapers available to date.

Both Wright State’s Special Collections and Archives and the Dayton Metro Library house original issues of the Wright brothers’ newspapers. Combining the two collections in an online archive makes the valuable resource available in a readily accessible format.

Wilbur and Orville Wright operated a printing business from 1889 to 1899 — before they started their bicycle business and tackled the challenge of flight. 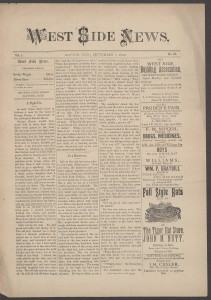 They worked on several publications and local newspapers, including the West Side News; The Evening Item; The Midget, a small school newspaper; church pamphlets; parts catalogs for bicycles; and the Dayton Tattler, which they published for neighborhood friend and noted poet and novelist Paul Laurence Dunbar.

The newspapers provide a glimpse into the Wrights’ neighborhood and “open a window into their lives before flight, fame and fortune,” said Dawne Dewey, head of Special Collections and Archives.

“We often forget that before they became famous for flight, they were ordinary young men whose world included family and friends, next-door neighbors, shops along Third Street, the interurban, downtown Dayton and the surrounding countryside. What they chose to write about or reprint in their papers reveals clues about the society and culture of the times,” Dewey said.

Dewey said one of the most touching articles the Wrights wrote is titled “Our Mother.” It appeared in the West Side News after the death of their mother, Susan Koerner Wright, on July 4, 1889, after a long battle with tuberculosis.

“It is the only article on the page and tugs at the heartstrings,” Dewey said. “We can only imagine the grief they felt while writing it.”

With assistance from the Digital Services Department in the Wright State University Libraries, the newspapers will be available in digital format on both Wright State’s CORE Scholar and on the Dayton Metro Library’s Dayton Remembers digital image website.

The West Side News featured local news from Dayton’s west side, as well as national news, humorous stories and local ads. 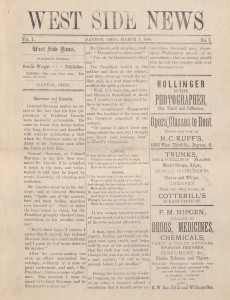 The Evening Item provided a digest of world and national news, along with local and regional articles. The Wright brothers purposely kept The Evening Item short and organized so that it would be “in such shape that people can see at a glance what the paper contains.”

Additional issues will go live over the next several months. The Dayton Metro Library will add the newspapers to its website later this year.

“This project benefits both institutions by combining our rich Wright Brothers Newspaper Collections into one online source. And that in turn benefits researchers,” Dewey said. “When we share our resources in this way we make the Wright brothers’ and Dayton’s history much more accessible.”

“The Dayton Metro Library welcomes this collaborative effort with Wright State University Libraries and appreciates the skills and expertise offered by the Digital Services Department. We are excited that the rich history of our community and its favorite sons will be more easily accessible to researchers in the Dayton area and around the world,” Jamie McQuinn, special collections manager for the Dayton Metro Library.

Wright State Digital Services staff digitized the newspapers using an overhead large format scanner to capture the pages in one shot. Pages were processed, quality checked and made into PDFs. Optical character recognition software was used to make the text on the pages full-text searchable.

“In CORE Scholar, researchers can search across all of the Wright brothers’ newspapers to find keywords and topics quickly and efficiently,” said Jane Wildermuth, the head of Digital Services. 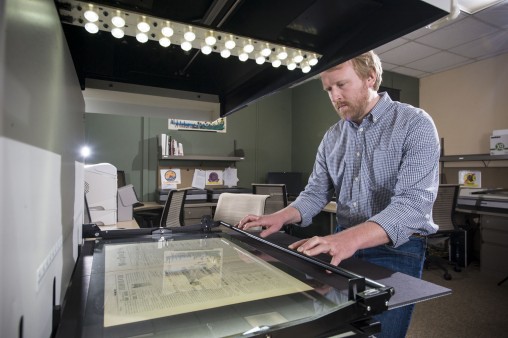 Digitization specialist Ryan O’Grady reviews a copy of the West Side News on an overhead large format scanner in the Digital Services Department’s office in Dunbar Library.

The digitization project was made possible through a donation to the Wright State Department of Communication from the Greenwood Family.

Wright State’s Special Collections and Archives houses one of the most complete collections of Wright material in the world.