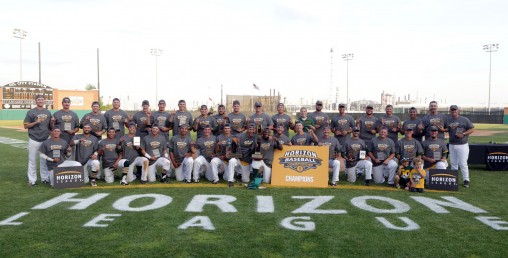 Wright State defeated Milwaukee 17-4 to win the Horizon League Championship at Oil City Stadium in Whiting, Ind. The Raiders will play in the NCAA Regionals in Champaign, Ill.

The Wright State baseball team is headed to Champaign, Ill., for the NCAA Regionals and will take on Notre Dame in its opening game on Friday, May 29, at 1 p.m. Eastern at Illinois Field.

Wright State won the Horizon League Tournament title May 23, with a 17-4 win over Milwaukee.

The Raiders (41-15) are making their fifth appearance in the Division I NCAA Regionals and 12th NCAA appearance overall in program history. This year marks the first time that Wright State has been a No. 3 seed in a regional since the format was changed in 1999.

Wright State and Notre Dame are joined by regional No. 1 seed Illinois and No. 4 seed Ohio. The Fighting Illini (47-8-1) won their 30th Big Ten title in 2015 and boast the top winning percentage in Division I (.848) and the fewest losses (8). Illinois, which posted the longest winning streak in the country this season (27 games), swept the top three Big Ten individual awards for the first time in school history: David Kerian (Player of the Year), Tyler Jay (Pitcher of the Year) and Dan Hartleb (Coach of the Year). 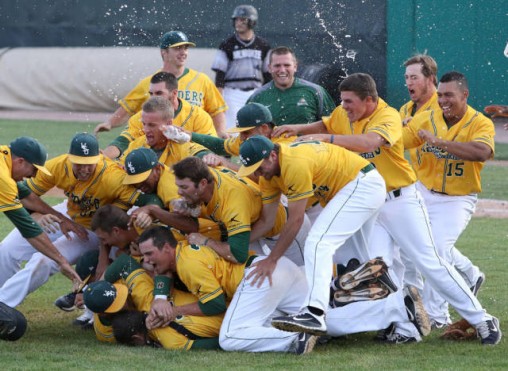 The Wright State baseball team celebrating after winning the Horizon League Tournament May 23.

Ohio (36-19) won the Mid-American Conference tournament title last weekend, its first title since 1997, with a 6-2 victory over Ball State. The Bobcats’ road to the crown included an extra-inning 4-1 thriller over Western Michigan that featured three 11th-inning home runs and the first no-hitter in MAC Championship history thrown by junior Connor Sitz that allowed the Bobcats to eliminate Bowling Green with a 6-0 win and earn a title game berth.

Wright State is 0-1 all-time against Illinois, with the Fighting Illini winning 5-4 on March 19, 2002, in Bradenton, Fla. The two teams have no common opponents this season.

Get ticket information for the regional tournament >>