Digging up the past 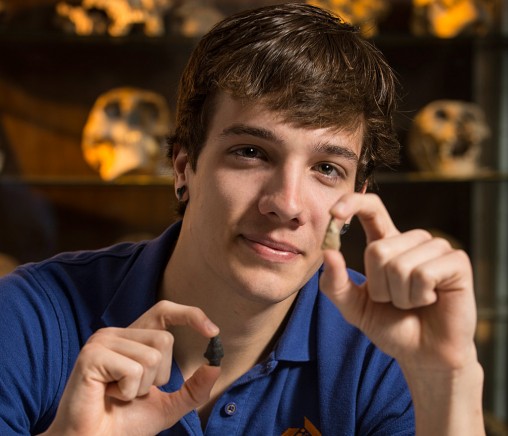 Wright State student Tyler Heneghan explores the past through field work at the Fort Ancient Earthworks and an internship with the Dayton Society of Natural History and SunWatch Indian Village. (Photos by Will Jones)

Imagine walking through a field and finding prehistoric projectile points (or arrowheads), fish hooks, a knife, animal remains, a scraper and pottery shards.

That is what Wright State student Tyler Heneghan found through his school field work at the Fort Ancient Earthworks, along with learning experimental archaeology through his internship at the Dayton Society of Natural History and his time at SunWatch Indian Village.

“There are artifacts everywhere,” Heneghan said as he walked around a farmer’s field as part of Wright State’s Field School in Archaeology and found projectile points and flakes, detailed indents in rocks from tools used in the past.

Heneghan, in a white shirt with brightly splattered abstract flowers and shark tooth studs in each ear, described anthropology as the study of humans that is the most scientific of the humanities and the most humanistic of the sciences.

Similarly, archaeology is the scientific study of the physical evidence of past human societies recovered through collection, artifact analysis and excavation. Archaeology is a subgroup of anthropology.

Heneghan is a double major in anthropology and biological sciences, with a minor in earth sciences.

He came to Wright State pursuing a career in pediatric dentistry but changed his mind and added anthropology as a major when he took an Introduction to Archaeology course. He will continue as a supplemental instructor and teaching assistant for Introduction to Biological Anthropology next semester.

Heneghan would like to specialize in zooarchaeology and microwear analysis of bone tools. He also has an interest in prehistoric times of the Midwest Native Americans.

He will travel to Illinois and Indiana during the summer to study the Mississippian Native American culture.

Heneghan interns with the Dayton Society of Natural History, excavating through Wright State’s Field School in Archaeology, where he investigates at the Fort Ancient Earthworks and one of its locations, SunWatch Indian Village.

He also participates in experimental archaeology for SunWatch. One recent project at SunWatch includes reconstructing a prehistoric Native American house. Heneghan and archaeologists cut down trees, cut and bundled six to seven feet tall big bluestem grass and Indian grasses that were common with the Native American lifestyle.

Archaeologists at SunWatch, which was excavated in the 1970s and ’80s, have conducted microwear analysis, which can determine the function of chipped stone tools through high-powered magnification. Archaeologists determined that pottery pieces contain mica, a mineral commonly used in pottery and originally from the Carolinas, leading the researchers to conclude that trading occurred at the SunWatch location nearly 700 years ago.

Heneghan said the projectile points have never been analyzed. The artifacts were in dirt and shoveled into a bag during the excavation and later ran through the float machine and the dirt was stored in newspaper. Heneghan said that he found them as he was rehousing the wrapped dirt.

“We leave some parts of sites unexcavated for archaeologists in the future to dig up and use advanced technology that we don’t have today,” Heneghan said.

Archaeologists are able to discern the tools, household items, environment, diet and other aspects that a specific group used by applying specific tools to artifacts.

“You can analyze the soil. If the Native Americans had a fire it changed the magnetism of the soil ever so slightly,” Heneghan said. “Using a magnetometer picks up these slight differences in magnetism within the soil.”

This allows researchers to visualize the living style of their studied group. 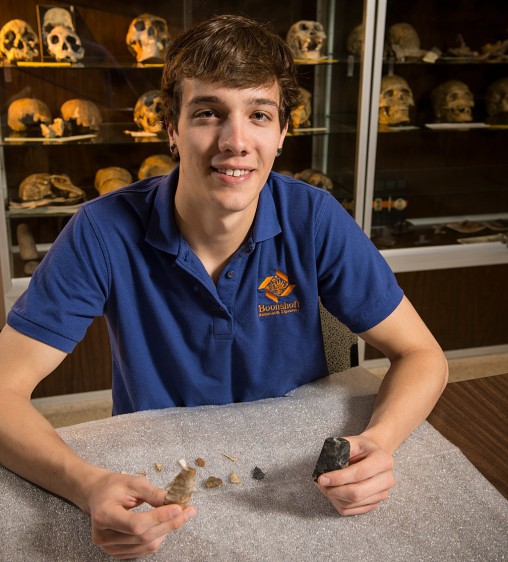 Tyler Heneghan has found prehistoric projectile points (or arrowheads), fish hooks, a knife, animal remains, a scraper and pottery shards during his field work and internships.

Archaeologists may also use a float machine that separates small pieces of artifacts from dirt and rocks by washing it through a bucket-like tub of water.

Ground penetrating radar (GPR) is commonly used within the field. GPR is a geophysical method that uses radar pulses to image the subsurface. It uses electromagnetic radiation in the microwave band (UHF/VHF frequencies) of the radio spectrum and detects the reflected signals from subsurface structures and surfaces including rock, soil, ice, fresh water and pavements.

Studying archaeology and anthropology has allowed Heneghan “to realize how much we have in common with people from prehistoric times,” he said. “We’re still a lot like them by what we have and what we use. You would think that we would be so different from them, but we’re not as different from people from the past as we think.”

Heneghan is a member of the Wright State Underwater Raiders working to receive professional scuba diver certification. This contributes to his interest in underwater archaeology.

He interns and volunteers at the Discovery Zoo in the Boonshoft Museum of Discovery, where he educates guests on the conservation of their animals, as well as creates diets for the animals, cleans up after them and currently trains a Baker’s spinytail iguana for future use on educational programs.

He recently went on an expedition in Kentucky to study micropaleontology with one of his courses at Wright State. He investigated the possibility of correlating two separate locations using the microfossils within the samples he collected. He found shark teeth in a quarry where the fossils were embedded in limestones and in a road cut.

At SunWatch, archaeologists have found bone fishhooks. They can conclude that prehistoric humans fished in that specific location.

However, finding a fish hook made of bone raises questions such as the purpose for the shape of the hook, was it shaped and created for a specific type of fish or was its size and shape dependent on the size of the bone from which it was crafted? Heneghan will present answers to these questions at the MidWest Archaeology Conference at the University of Wisconsin-Milwaukee this November.

Heneghan has gained much experience and knowledge through his internship and field study.

“I’ve learned how to be an attractive applicant to graduate schools. … I’ve received a lot of mentoring and have learned what an archaeologist does at the museum as well as experimental archaeology,” Heneghan said. “The internship helped me see what archaeology is like in a professional setting, something that can’t be learned in a classroom.”

In addition, he said Wright State “has provided an opportunity for me with field school experience.”

His internship experience has helped him land a summer fellowship funded by the National Science Foundation with Indiana University Purdue University-Indianapolis.

His advice to those interested in archaeology or anthropology is to gather as much experience as possible, expose yourself to as many sub-disciplines to be better rounded and know how to collaborate with others, write scientifically and professionally for research and grants and have a broad understanding of cultures and ethics. The field requires an open mind and appreciation toward other cultures to ethically handle artifacts.

“Rather than choosing a career on the amount of make money you would make, choose a career you’ll enjoy,” Heneghan said. “If I become an archaeologist, I wouldn’t trade it for any other job.”