It’s no surprise that bowling is in her blood. She grew up across the street from a bowling alley.

What is a surprise is how good Mandy Wilson is. She has bowled perfect 300 games 17 times, was the first woman to bowl a 700 series in Ireland, and in 1991 shook hands with Fidel Castro after winning a silver medal in Havana, Cuba, at the Pan American Games.

“People in the bowling world can’t believe I work in a library because when I bowl I jump around and yell sometimes,” Wilson said. “I’m a different person when I bowl. When I’m competing I’m pretty intense.” 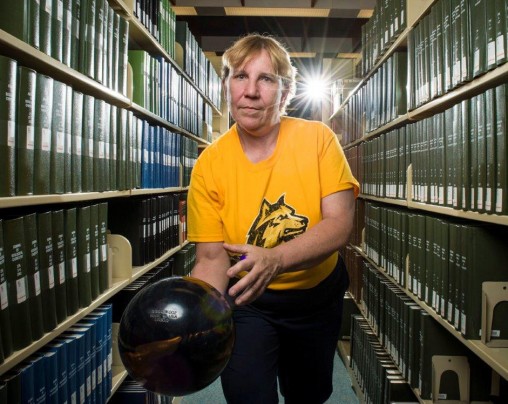 When she’s not managing the stacks in Wright State’s Dunbar Library, Mandy Wilson is knocking down pins as a world-class bowler. (Photos by Erin Pence)

Wilson was raised in Springfield, Ohio, the daughter of a truck-driving father and a mother who worked as a secretary. She began bowling competitively when she was 9 years old.

“I grew up right across the street from Shamrock Lanes,” she said. “I could bowl every Saturday morning. During tournaments, you could keep score. That’s how I earned spending money.”

After graduating from Springfield North High School in 1976, Wilson enrolled at Wright State, where she made the Raider softball team as a walk-on and played for four years.

After graduating in 1981 with her bachelor’s degree in education, Wilson set off to teach history and coach basketball. But she quickly realized she didn’t have the temperament for coaching. So over the next few years, she worked on the loading docks of a soft-drink company and then as an assistant manager of an apartment complex.

In 1984, Wright State came back into her life. She got a part-time weekend job at Dunbar Library. That led to a full-time job and then student supervisor, in which she would hire and train students. For the past 10 years, she has been library stacks manager, overseeing a half million books on three floors.

Major consolidations have included the music library from the Creative Arts Center and the medical books and journals from the Health Science Library.

Shortly after graduating from Wright State, Wilson began bowling in leagues and competing in tournaments. In 1984, she won a spot in the U.S. Open, the Professional Women’s Bowling Association’s most competitive tournament.

“I bowled really badly. I finished 165th, almost last,” she recalled. “I told myself I would never be this bad again. So I spent the next year learning some stuff, getting some coaching. And the next year I went to the U.S. Open and came in 34th.” 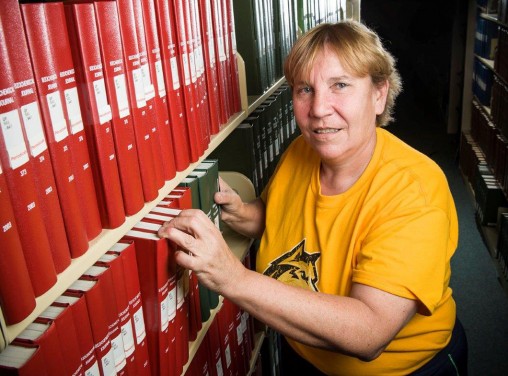 Mandy Wilson, who graduated from Wright State 1981, has worked for the University Libraries for 31 years and currently serves as the library stacks manager, overseeing a half million books on three floors in Dunbar Library.

Wilson bowled her first 300 game on a Friday night in 1984 at Poelking Lanes on Wilmington Pike in Dayton.

“I was with some of my friends; we were just having a good time,” she recalled. “It was the 10th frame before I knew it. I didn’t even really think about it. But when I did it, everybody was jumping up and down and screaming.”

Wilson’s most recent 300 game came in March at the National Golden Ladies Classic in Las Vegas. She recently finished fourth out of a field of about 60 in the highly competitive Senior Queens bowling tournament in Wisconsin.

Wilson, who serves as adviser to Wright State’s bowling club team, currently averages 211. On a good day, she can beat anybody. Her opponents often fall victim to her Rising Star, a black ball with bronze marbling.

Wilson hopes to join the women’s professional bowling tour when she retires even though she has had a couple of knee surgeries she attributes to bowling and her softball-playing days.

In the meantime, her dance card is pretty full.

“I either put books away or I throw a bowling ball,” she said. “I don’t have much time for anything else.”