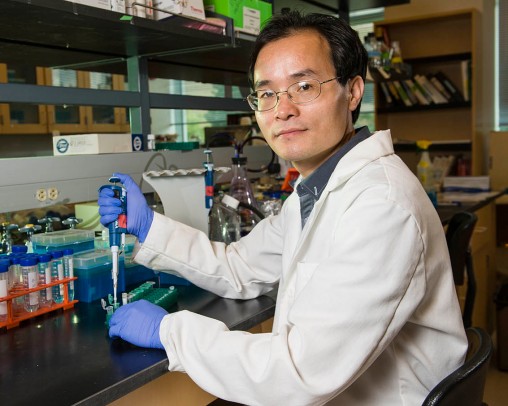 Wright State researcher Weiwen Long received a $1.7 million, five-year grant from the National Cancer Institute to research a gene that plays an important role in the formation and spread of lung cancer and other cancers. (Photo by Erin Pence)

A Wright State University researcher and his team are working on unlocking the mysteries of a gene that plays an important role in the formation and spread of lung cancer and other cancers.

“This is no small feat at a time when funding is so hard to come by,” said Madhavi P. Kadakia, chair of the Department of Biochemistry and Molecular Biology.

Long, who teaches courses in cell signaling and cancer biology, joined the faculty at Wright State in 2013.

Kadakia said Long has developed “a vibrant lab” in just the short time he has been at the university.

Long and his research team are studying the roles and underlying molecular mechanisms of ERK3, a nonconventional kinase gene, in regulating cancer progression and metastasis. A kinase is an enzyme that chemically changes the structures and functions of other proteins (substrates) and is known to regulate cellular pathways.

“We do not know much about ERK3, but it is a very important gene physiologically and pathologically,” Long said.

In lung cancer and breast cancer, for example, the ERK3 gene is overexpressed or mutated.

Long and his team are trying to elucidate ERK3 signaling cascade — what activates ERK3 and what ERK3 targets.

They have identified the interacting proteins and are using both in vitro and in vivo assays to delineate ERK3 signaling network. To define the role of ERK3 in tumor growth and progression, they are utilizing two different testing models — overexpressing ERK3 in mice to see if it causes tumors to spread and removing ERK3 to see if that causes the tumors to shrink.

Long grew up in a rural village in Hunan Province in south central China. He got a bachelor’s degree in horticulture from Hunan Agricultural University with the idea of returning to his village to help improve the quality and production of crops there. 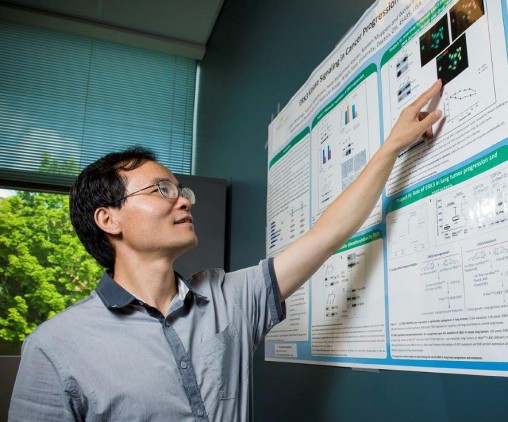 Weiwen Long grew up in Hunan Province in China, obtained his Ph.D. from Tulane University, did postdoctoral training at the Baylor College of Medicine and joined Wright State’ Department of Biochemistry and Molecular Biology in 2013.

But during college, Long became more interested in molecular biology, which he pursued in the form of a graduate degree at Huazhong Agricultural University.

In 1999, Long began molecular biology work at a research institute affiliated with the University of Scranton in Pennsylvania. He moved into cancer biology, obtained his Ph.D. in structural and cellular biology in 20s05 from Tulane University and then did postdoctoral training at the Baylor College of Medicine in Houston.

Long has worked with pioneers in the field. One of his mentors investigated the functions and molecular mechanism of growth factor receptors in cancer progression. Receptors are proteins in cells that can be bound to certain substances (ligands) that circulate in the blood.

Another mentor studied how hormones such as estrogen act on cancer cells to promote cancer growth and progression.

Now Long and his research team are integrating and harnessing the knowledge and expertise from both of these two fields to investigate ERK3 signaling and aim to define ERK3 as a new diagnostic and/or therapeutic drug target for treating cancers.