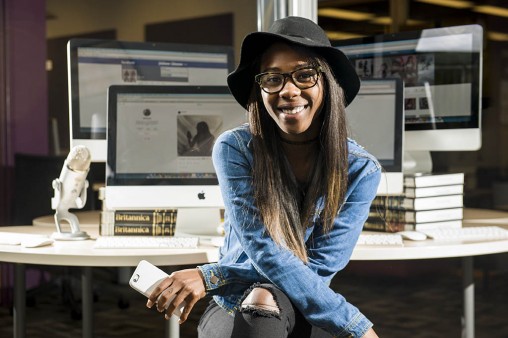 See Alli Fitzpatrick in action at vine.co/AlliCattt and youtube.com/user/AlliCatttable. (Photo by Erin Pence)

She has 3.8 million followers on Vine, 373,000 on Instagram, and 128,000 on Twitter. Her six-second Vines have been viewed more than 2 billion times, while her longer videos on YouTube have more than 3.1 million views.

Fitzpatrick describes herself “as an actress that does six-second videos on an app.” That app is Vine, a video-sharing service through which users share six-second-long videos that loop, or continuously play.

She makes funny videos inspired by real-life and often self-deprecating situations. She’ll trip trying to jump into a pool, burn herself while curling her hair, or embarrass herself while flirting with a guy.

“People will message me on Twitter and say, ‘I was having such a bad day before I saw your Vine, and you just made me smile,’“ she said. “I think that’s really cool that I could make someone who was sad happier.”

She describes AlliCattt as a character bubbling with energy who likes to have fun. She has used the lessons she learned in her Wright State theatre courses to help develop AlliCattt.

“I took my personality, and I just amped it a little bit more,” she said. “AlliCattt is more cheerful and crazy and loud.”

For Fitzpatrick, being in front of the camera comes naturally. When she was young, her father liked to film home videos. Fitzpatrick and her sister would get on camera and say funny things.

“Any way to get the attention,” she recalled.

She grew up in Xenia and went to Xenia High School, where she took advanced theatrical production and played the flute in band. Her mother teaches health and physical education at Central State University and her father is a retired auto mechanic.

Fitzpatrick started using Vine after a friend suggested she create an account to follow celebrities, especially her favorite, Tyler the Creator. She watched all his Vines but also noticed that people who are not famous were receiving a lot of attention on the site.

So she started making videos as AlliCattt. Her big break came thanks to a video featuring her dog, Roscoe, a Pomeranian-corgi mix. In it, Fitzpatrick attempted to take a selfie with Roscoe, who bit her instead.

“Everybody thought it was hilarious,” she recalled.

It took her nine months to gain a million followers on Vine—and she hasn’t looked back.

She has created more than 1,000 Vines, regularly uses Twitter to connect with fans and promote her work, shares photos from her latest trip on Instagram, and is now creating longer videos on YouTube.

When she first started making videos, Fitzpatrick would often work quickly and use just one take. Today, she takes multiple shots and directs her fellow actors, including Brandon Dotson, a childhood friend who often appears in her videos.

She also closely monitors each Vine. Those that get 100,000 likes from her followers she considers successful and will create follow-ups.

“As soon as we post a Vine, I need to have at least 1,000 likes within three minutes or else I know it’s not going to turn out right,” she said.

She has a manager and has appeared in ads for products like Coke, Fanta, and Sprite and apps like Skout and Spark Starter.

Fitzpatrick has traveled around the country to attend events like the MTV Video Music Awards and Teen Choice Awards as well as meetups with other internet stars. In May she traveled to Atlanta for a Vine birthday party; in June she went to New York for DigiTour, a festival where fans can meet internet celebrities; and in July she attended VidCon, a convention for YouTube and Vine creators in Anaheim, California.

Fitzpatrick wants to use her social media success to jump to movies and television.

“Social media can definitely bring you up,” she said. “And that’s what we’re all really looking for.”

She enjoys traveling, interacting with fans, and being on camera. But she doesn’t considers herself a celebrity—at least not yet.