Armed with a masonry hammer and hand trowel, Sung Kim hunches over the paving stones on Wright State University’s Quad.

He shatters one of the pavers into pieces with the hammer, scoops out bits of brick and sand and wedges a new brick into place with the tap, tap, tap of a rubber mallet.

The friendly, 70-year-old grounds maintenance worker is a fixture on campus. He has worked at Wright State for 40 years and has been replacing brick pavers since 2008. Averaging about 60 pavers a day, it is possible he’s replaced as many as 80,000. 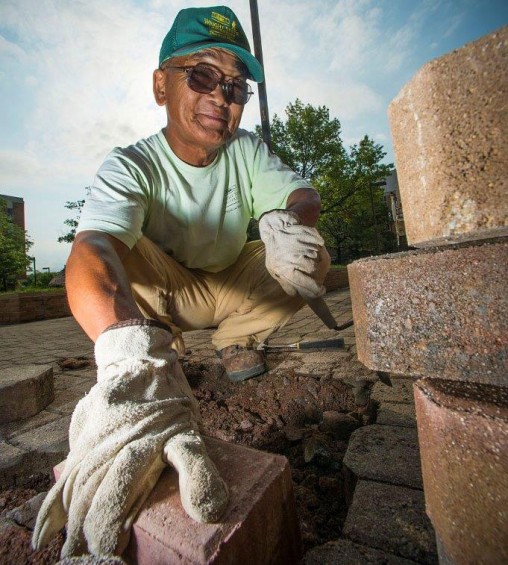 Replacing up to 60 pavers a day, Sung Kim, a grounds maintenance worker at Wright State, keeps walkways on the university’s campus safe and beautiful. (Photo by Will Jones)

“It’s a monumental task,” said Wright State Architect Rob Thompson. “The work that we see Kim doing all the time not only helps keep the campus looking attractive, but it really serves one of our core missions about being disability friendly.”

When he is replacing pavers, Kim is hard to miss. Circled by orange traffic cones and stacks of paving stones, he squats with the aid of a pink, couch-like pillow crafted by his wife. Nearby is a broom lying on its back and a white Cushman-like supply truck with a flashing yellow light.

Students will often stop and thank Kim for his work. In hot weather, some will bring him bottled water.

The pavers form a mosaic that wends its way through campus, becoming the connective tissue for buildings, sculptures and other architecture.

“Having a consistent material that people interact with throughout their experience here — your paving surface — really helps to unite the campus,” said Thompson. “It helps tie everything together.”

Kim replaces the pavers if they are broken or become displaced or uneven because of traffic, weathering or snowplows.

If the pavers become uneven, they can cause problems for people who are visually or mobility impaired.

“For as nice as pavers are to look at and walk on, they do represent some specific challenges, especially for a university like Wright State that prides itself on being disability friendly,” said Thompson. 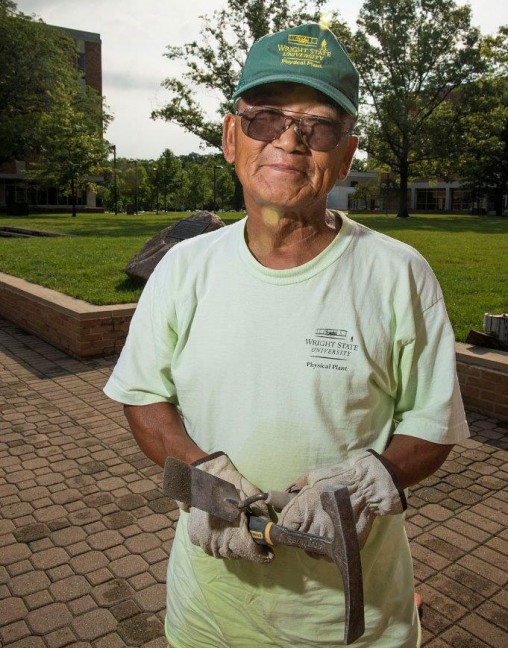 After 40 years at Wright State, Sung Kim retired in 2007, but returned to the university a year later and has been replacing pavers on campus ever since.

Kim grew up in Busan, a large port city in South Korea. In 1974, he moved to Dayton, where his brother-in-law was stationed with the Air Force. He began working at Wright State as a janitor on the night shift and later transferred to the grounds department, becoming a supervisor.

Kim retired in 2007, but after one year of “resting around” returned to Wright State as a grounds maintenance worker, replacing the pavers.

Thompson said that what Kim does is an art form.

“There is a real kind of human quality to it,” Thompson said. “There is craft and there is care put into the surface that we all kind of take for granted at times.”