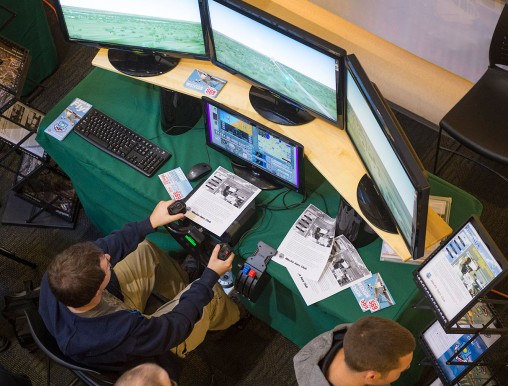 Wright State University will celebrate the innovative spirit of its namesakes and researchers working on campus today with the fifth annual Wright Brothers Day.

Wright Brothers Day celebrates the anniversary of Wilbur Wright’s 39-minute flight on Huffman Prairie on Oct. 5, 1905. The flight demonstrated that the Wrights had advanced their design to the point of a practical airplane.

Aleasiah Howard, a marketing major and AMAWSU president, encouraged students to stop by Wright Brothers Day to learn about the university’s history and the innovative work being done on campus today.

“This event allows all students and interested participants to learn about the Wright brothers and their monumental journey into flight, but also enables attendees to adventure into the world of cutting-edge technology,” Howard said. “We feel it is essential to preserve the Wright brothers’ legacy and hope this event acts as a runway for students to connect with the aviators through knowledge of their journey, which they can then utilize to create their own paths towards a lasting mark on the world.”

The event will include a keynote address at 11:15 a.m. by Stephen Wright, great grandnephew of Wilbur and Orville Wright. Ohio Gov. John Kasich will welcome visitors in an introductory video. Food will also be available.

The governor has declared Oct. 5 Wright Brothers Day in the state in honor of the “important contributions of the Wright brothers to improving the well-being of the citizens of Ohio.” 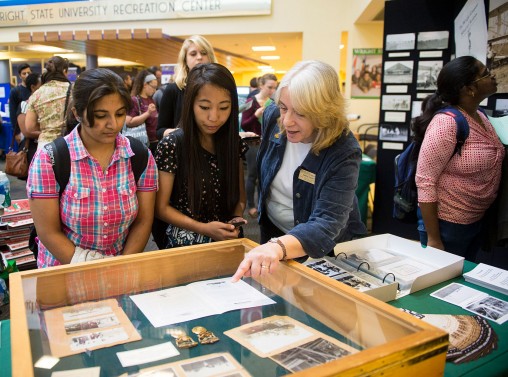 Wright State’s Special Collections and Archives and its head, Dawne Dewey, will display an exhibit on the brothers’ flights in Europe in 1908 and 1909.

Wright Brothers Day connects the brothers’ innovative spirit with the same drive found currently on campus. To highlight that spirit, the Oct. 8 event will include displays featuring innovative projects from Wright State researchers and local organizations.

These include Raj Soin College of Business‘ Data Analytics and Visualization Environment lab, which researches Big Data; the National Center for Medical Readiness at Calamityville; radar imaging by the College of Engineering and Computer Science and the Wright State Research Institute; a longitudinal study of cranial growth from the Boonshoft School of Medicine; and biomedical engineering information by the Air Force Research Laboratory.

Wright State’s Special Collections and Archives, which houses one of the most complete collections of Wright material in the world, will have an exhibit on the brothers’ flights in Europe in 1908 and 1909. The exhibit will include original images from the university’s “Wright Brothers Collection” and film clips of the Wrights flying in 1908 and 1909.

Wright Brothers Day was originally designed to raise awareness among students about the accomplishments of Wilbur and Orville Wright, who invented the airplane in their Dayton bicycle shop and conducted most of their early test flights on Huffman Prairie.