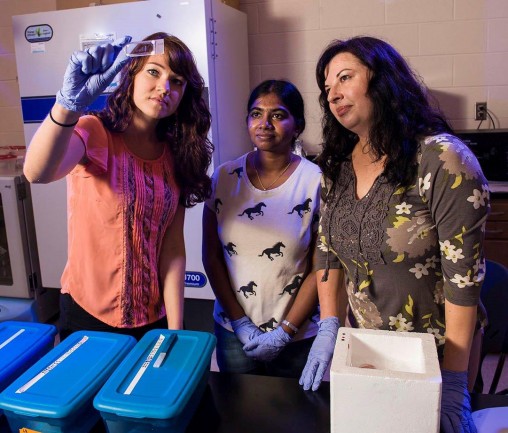 From left: Chelsea Hurley, Pavani Beesetty and Elena Kohls were among the Wright State students who spent the summer working on a research project designed to identify genes that broaden the knowledge of reproduction and offer promise for breakthroughs in infertility. (Photo by Erin Pence)

A Wright State University research project designed to identify genes that broaden the knowledge of reproduction and offer promise for breakthroughs in infertility got a big push forward from students.

Six students in the College of Science and Mathematics opted to take a summer lab offered by Labib Rouhana, an assistant professor of biological sciences, to help him with research funded by the reproductive division of the National Institutes of Health. Rouhana studies a model organism, the planarian flatworm, that can regrow its reproductive organs from stem cells.

“The students actually demonstrated expression of about 40 genes in the reproductive system, some of which haven’t been demonstrated to do so before,” said Rouhana. “Finding which genes are expressed in these cells gives us a better understanding of how reproduction works.”

He said characterizing certain genes could prove to help in infertility, develop male contraceptives or even control the spread of parasites.

Before Rouhana arrived at Wright State in 2013, he identified about 1,500 out of the flatworm’s 25,000 genes that may be expressed in the testes or ovaries.

Each of his students in the summer lab had to apply a complex series of techniques in cell and molecular biology to determine whether about a dozen of those genes were expressed in the flatworms and had a function in reproduction. Two graduate students, four undergraduates, a teaching assistant and a guest high school student worked for three weeks, five hours a day.

“It was a lot of work, and you will not necessarily get the answers right away with the first set of experiments,” said Elena Kohls, a senior biology major from the Ukraine. “But with the planarians’ ability to regenerate every part of their body, we can learn a lot of things that can help people in the future with chronic diseases. It is amazing that we have this going on at Wright State.”

Chelsea Hurley, of Beavercreek, just graduated with a bachelor’s in biology after taking the lab and is currently working at the Wright State Research Institute.

“The processes are very intricate, and in some cases — especially when you’re fixing the slides — almost an art form. It takes a very steady hand,” Hurley said. “But it was really cool to be part of that part of science – first-hand research of something that’s unknown.”

Pavani Beesetty, of India, is working on her doctorate in biomedical sciences on a neuroscience track and aspires to become a college professor. She took the lab to learn more about the planarian systems and the gene-testing techniques.

“If I learn a lot of techniques, I can pick the most suitable one when I’m doing my research,” she said.

Rouhana said the lab and working on research funded by the $439,000 grant is an opportunity for students to actually do real science.

“Hopefully, the students who take the lab get the experience of what it’s like to actually be a scientist because they are not only involved in research, but also in the chance of making discoveries,” he said.

The laboratory course will be available over the next two summers. It is supported with funds from NIH grant 1R15HD082754-01 as well as the Department of Biological Sciences.