Last week, we featured students from Bangladesh, Nigeria and India.

Below are impressions from students from China, Germany and Iran. 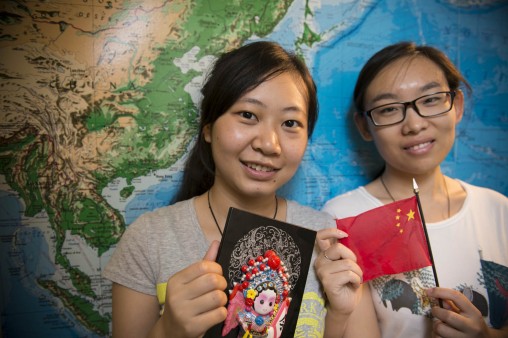 With 34 provinces to tour, a Great Wall to walk over, opera to see in Beijing and a Dragon Boat Festival to enjoy, you can never be bored in the stunning country of China.

“China has more than 5,000 years of history,” said Jiangnan Xing. “As early as the Tang Dynasty in China. China has its own cultural values, and China also has different philosophical ideas from other countries. … The essence of Chinese culture is euphemism, which is different from the United States.”

Euphemism is using a mild word or expression in place of an otherwise offensive or vulgar word.

The weather in China various from region to region. With heavy rain in southern China, most houses have a sloping roof to ensure that the water drains from the roof, Xing said. Northern China is sunnier, which means the roofs are generally flat. Northern China has a palace, ancient city, stone carvings and paintings.

Different provinces also have different tastes in food although noodles are common throughout the country.

“Chinese people like to spend time cooking,” said Xing. “The traditional food is a kind of recognition of history and the inheritance of culture. In festivals or celebrations, people in different provinces will celebrate their favorite food. No matter where you come from, there will always be a Chinese food in your heart.”

Young students spend much of their time studying in school.

“Education is harder in China. In China, no matter what you want to do as a job or in higher education, you have to take an exam,” said Yiran Zhang and Xing.

When students take college entrance exams, the government will reduce distractions by blocking traffic from roads around schools.

To escape from studying or working you can explore the famous operas of Beijing. “There are a lot of traditional instruments that have a different feel. Beijing opera has a lot of history,” said Xing.

Zhang said she likes lianpu, bright paint-like makeup famous in Beijing operas. The make-up is exaggerated over the face revealing a character’s different moral qualities through colors, lines and shapes. For example, red symbolizes loyalty and bravery, and the eyes may be painted like wings of a butterfly, swallow or bat.

There are different lifestyles within each province.

Xing misses the Yunnan Providence. “I like it very much. It’s a famous part of China for 56 minorities (gathering there). If you come to this province, you can maybe see all of them,” she said. Chinese tea is popular in the Yunan Providence.

Additional facts about China include a unique history in medicine, specifically acupuncture. Cheongsam dresses are common among Chinese women, and underground subway systems can be found in some Chinese cities. Pingpong, gymnastics, diving and badminton are popular sports that Chinese citizens excel at, Xing said. 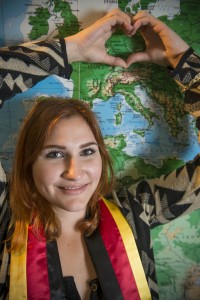 Germany is a good destination if you want to get a taste of European life. With soccer, chocolate, castles and highways with no speed limits, Germany provides a rich experience for everyone.

Germans usually begin the day with a light breakfast, while lunch is the main meal of the day.

“I never imagined myself missing bread so much. Honestly, I never liked the dark typical German bread before I came here, but now I have a craving for it,” said Stöcklein. “The first time I was eating white bread in America was something different. It tasted like eating pure sugar.”

Other food and drinks also taste different in America than they do in Germany.

“I am eating almost no chocolate in the States since the chocolate tastes way different and it cannot compete to German chocolate at all,” she said. “My theory is that American groceries contain more sugar than Germany’s.”

She also misses Döner, spiced meat with vegetables in bread. She says that beer is much more watery in the United States than in Germany.

Education between the two countries appears very differently. Education is free in Germany and libraries rent textbooks at no cost. There are no clubs, sports or sororities and fraternities in colleges and universities. Students do not feel rushed to finish college and can be in college longer than five years

“One thing about Germans … is people are more reserved than Americans and most Germans show a lack of emotions, which might appear rude to some people,” Stöcklein said. “Once you earn their friendship and trust you gain a friend who is a lot more solid and real.”

Her favorite time of the year is summer during the World Cup. “Yes, most of us are really into soccer,” she said.

Germany is a country filled with beautiful scenery.

“One example is Neuschwanstein (a castle, which) was the inspiration for Disneyland’s Sleeping Beauty castle,” she said. “This stunning structure is the ideal for romantic architecture and is one of the many fairytale castles dotted throughout Germany.”

Germany uses military time. Most public restrooms are not free and instead ask for a janitorial tip or entrance fee. When ordering soft drinks, refills are not free and you have to ask for ice. The legal drinking age in Germany is 18 years. 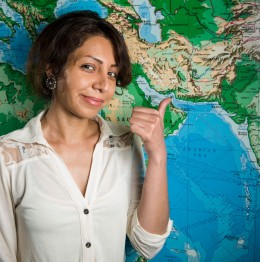 Deserts and water, bright cities, geometrical architecture and people who are both stylish and intelligent make up the complex country of Iran.

Formerly known as Persia, Iran is home to deserts, mountains and located between the Caspian Sea and the Persian Gulf. The country is three times the size of Arizona, says Maryam Labaf.

“Iran is a very large country famous for poetry, literature, art and music, which is also home to some of the most varied landscapes in the world,” said Labaf. “For adventure travelers, all that separates you from skiing and scuba diving on the same weekend is an hour-long flight. The Persian civilization is one of the oldest in history. Reminders are scattered all over the country, like ‘Takhte-Jamshid’ in Shiraz and ‘Bistoon’ in Kermanshah.”

Iran’s four seasons are similar to those in the United States.

Labaf’s favorite memory is when she and her family celebrated the Persian New Year, Noroz. She made a Seven S’s, or Haft Seen, a tabletop arrangement of seven symbolic items starting with the letter s from the Persian alphabet.

“While traveling to the north, we experienced the nice weather, went swimming in the Caspian Sea and ate delicious fish, as the north of Iran is famous for its food, especially seafood,” she said.

Labaf says Iranians are usually friendlier than Americans. “Iranians have a centuries-old reputation for being a very hospitable people, especially when it comes to foreign guests,” she said.

College life in Iran is similar to college in the United States.

“Generally speaking the whole structure of college and universities in Iran look like here,” said Labaf. “We are taught in the Persian language at college, although learning Arabic and English are required as well.”

The Ministry of Education supervises kindergarten through 12th grade, and higher education is supervised by the Ministry of Science and Technology. Eighty-five percent of the Iranian adult population is literate with many having doctorate degrees.