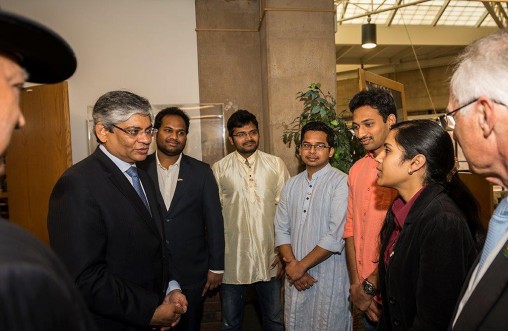 Arun Kumar Singh, left, ambassador of India to the United States, speaks to students during a stop at Wright State. (Photo by Will Jones)

The ambassador of India to the United States toured Wright State University and then addressed a campus gathering, saying foreign institutions like Wright State will play an important role in educating and unleashing the economic power of India’s young people.

After stops at the Neuroscience Engineering Collaboration Building, Special Collections and Archives and the Raj Soin College of Business, Ambassador Arun Kumar Singh spoke to more than 180 students, faculty, staff and elected officials at a reception on Nov. 9 in the Student Union Apollo Room.

Singh told the audience that relations between India and the United States are strong and getting stronger.

“The area where relations must get stronger is in education,” he said. “Your presence here is a part of that.”

In India, 800 million people are under the age of 35. As the global population ages, Singh said, this Indian population will be able to provide the world with a significant proportion of technically trained workers.

But to benefit from this “demographic dividend,” it is essential to educate this group, he said. Officials want to increase the number of people in India who have access to higher education from 18 percent to 30 percent by building more universities and increasing partnerships with foreign institutions.

There are currently 806 Indian students enrolled at Wright State, making up 43 percent of the school’s international student population. There are also 54 faculty and staff members who hail from India. And Indian alumni from Wright State have gone on to successful careers in many fields.

President David R. Hopkins said they are all part of the essential fabric of Wright State.

“We are always so incredibly proud of our Indian students, faculty, staff and alumni,” he said.

Singh stopped at Wright State as part of a tour of southwest Ohio. At the reception, the ambassador and his audience were entertained with Indian music, classic dance and a sketch artist. They dined on traditional Indian food such as chicken tikka, gulab jamun and palok pakora.

As a token of Wright State’s appreciation for his visit, Singh was presented with a framed photo of the Wright brothers and one of their airplanes.

Singh joined the Indian Foreign Service in 1979 and has had assignments in Moscow, Tokyo and the United Nations. He has served as ambassador of India to Israel, France and now the United States.

Singh said Indian students who have the opportunity to study at U.S. institutions like Wright State have both an understanding of Indian society as well as American society and the U.S. economy. The students also have a special capacity to deal with uncertainty, which can be a driver of innovation, he said.

“You will be in a position to contribute through that enhanced understanding of both societies to deepening economic links,” he told the audience. “Look to the future with optimism, hope and determination.”