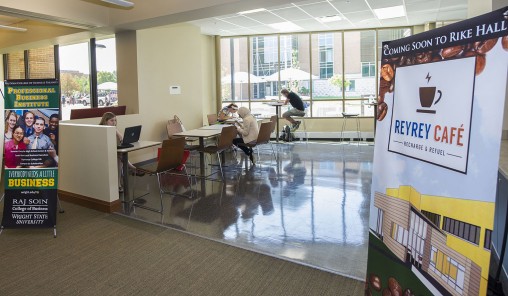 Wright State and the Reynolds and Reynolds Foundation will celebrate the opening of the ReyRey Café in Rike Hall with a grand opening ceremony at 2 p.m. on Dec. 2.

The first student-operated café at Wright State University will be celebrated with a grand opening ceremony at 2 p.m. on Wednesday, Dec. 2.

Sponsored by the Reynolds and Reynolds Foundation, ReyRey Café is housed in Rike Hall, home of the Raj Soin College of Business.

“It is an enterprise created with the goal of allowing students to ‘own a business’ and practice what they learn from the classroom,” she said.

Starting in spring 2016, students will take over management of the café, holding such key roles as CEO, CMO, CFO and COO.

“They will be able to do what entrepreneurs do in their businesses, such as accounting ratio analysis, financial projections, sales forecasts, market analysis, data analytics and human resources management,” Li said.

Proceeds from ReyRey Café will be directed to a student scholarship fund.

“Our student entrepreneurs learn to give back to the community, giving their operation a much bigger meaning,” Li said. “There is no bigger statement than ReyRey Café to showcase the Raj Soin College of Business’s commitment to student success and real-life learning.” 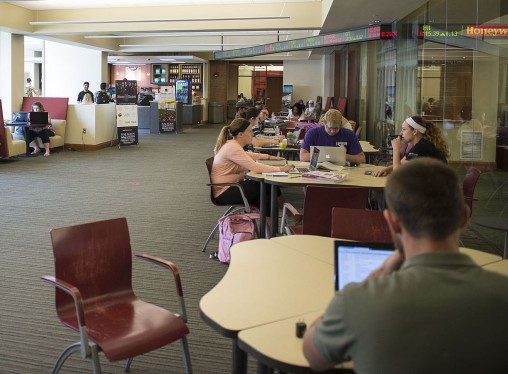 Starting in spring 2016, students will begin managing the ReyRey Café, holding such key roles as CEO, CMO, CFO and COO.

ReyRey Café is made possible thanks to a $340,000 gift from the Reynolds and Reynolds Foundation. Reynolds previously donated $50,000 to establish the Reynolds Espresso Lane Coffee Pit Stop in the Russ Engineering Center, which opened in March 2015.

“This new café symbolizes the type of vision and entrepreneurial spirit so critical to success in any business. To continually push the boundaries of how students learn and experience what they learn is one more attribute that helps distinguish the Raj Soin College of Business at Wright State and the entire university,” said Ron Lamb, president of Reynolds and Reynolds. “It’s a privilege for all of us at Reynolds to be involved in such a unique addition to the environment where students interact and learn.”

One of Wright State’s strongest corporate supporters, Reynolds and Reynolds has been partnering with the university since 1975. To date, they have contributed more than $1.6 million to the university, including $740,000 for the Reynolds and Reynolds Leadership Scholars program, a scholarship initiative that attracts top students to Wright State’s programs in engineering and computer science.

To learn more about the Rise. Shine. Campaign, visit rise.shine.wright.edu.

For more information on Reynolds and Reynolds, see reyrey.com.