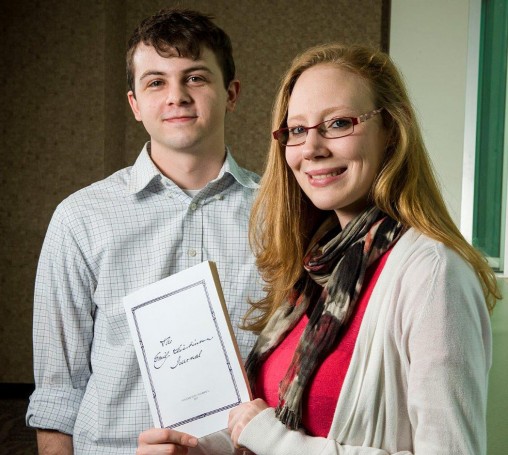 Two Wright State University English literature students are helping edit scholarly articles from around the world submitted to “The Emily Dickinson Journal” — the only publication devoted to the poet’s writing.

Last year, the Department of English Language and Literatures in Wright State’s College of Liberal Arts became the journal’s new home. The 25-year-old journal had long been printed at and distributed from Johns Hopkins University.

Dickinson grew up in the college town of Amherst, Massachusetts, and was in the first generation of college-educated American women. Over her lifetime, she wrote 1,775 poems.

“She’s hard to figure out for a lot of people,” said Humphreys. “She is one of those authors where you really have to work to understand her. But once you do, you just get it and the magic happens.”

Williams said Dickinson is playful, witty and fun to read.

“And she does interesting things with language,” he said. “It’s very distinct. You know when you’re reading Emily Dickinson.”

In their jobs as managing editors, Williams and Humphreys receive academic articles on various historical, cultural or philosophical aspects of Dickinson’s writing from scholars from around the country and the world. Once the articles are peer-reviewed by experts in the field, the students must copy edit the stories.

This involves making sure the authors’ citations are accurate. For example, the students must confirm the Franklin and Johnson numbers, which track the chronology of Dickinson poems, and scrutinize the poems line by line.

Articles in the most recent edition of the journal bear titles such as “The Breath of Emily Dickinson’s Dashes,” “Consciousness and its Revisions in Dickinson’s Poetry” and “Insane in the Membrane: Emily Dickinson Dissecting Brains.”

“It probably helps us learn how to be better writers ourselves,” said Williams, who eventually would like to teach English literature at the college level. “It’s a lot of information thrown at you at once. It’s like a crash course in Emily Dickinson scholarship. You learn something every time you come into the office.”

Humphreys became an avid reader when she was only 4 or 5.

“I used to go to the library and take out as many books as they would let me,” she said. “Once I got into high school and took more English literature classes, I got more into British literature and American literature.”

After attending Ohio University, Humphreys enrolled at Wright State after falling in love with the Dunbar Library and realizing how good the university’s English program is. She got her bachelor degree in English literature in 2014 and would eventually like to teach it at the college level or be an editor in an academic setting.

The department awards one new research assistantship each year for a graduate student in the literature concentration to serve as a managing editor. The assistantship comes with a full tuition waiver and a competitive stipend.