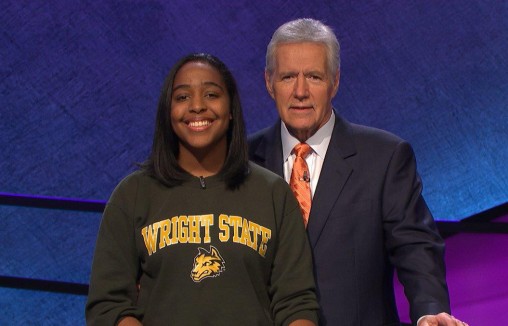 The Alumni Association will host a watch party on Feb. 2 to cheer on Wright State senior Emily Bingham during the “Jeopardy! College Championship.” Bingham is pictured on set with host Alex Trebek.

When Wright State University senior Emily Bingham picks up the buzzer on “Jeopardy!” and tests her knowledge against other bright college students from around the country, she will have a special cheering section.

A “Jeopardy!” watch party has been scheduled for Tuesday, Feb. 2, when Bingham’s performance in early January will be aired.

The Wright State Alumni Association invites students, alumni and “Jeopardy!” fans to attend the party, which will be held from 7 to 8 p.m. at Fox and Hound, 2661 Fairfield Commons Boulevard in Beavercreek. The show will air locally at 7:30 p.m. on WDTN-TV.

The Alumni Association will provide appetizers at the watch party. RSVP is not required but highly encouraged to help with catering. Register online >>

Bingham, a senior double majoring in literature and marketing, was among the 15 contestants competing in the “Jeopardy! College Championship” on Jan. 5-6 at Sony Pictures Studios’ Stage 10 in Culver City, California. Contestants included students from Stanford, Brown, Columbia, USC, Virginia, Northwestern and the University of California, Berkeley. 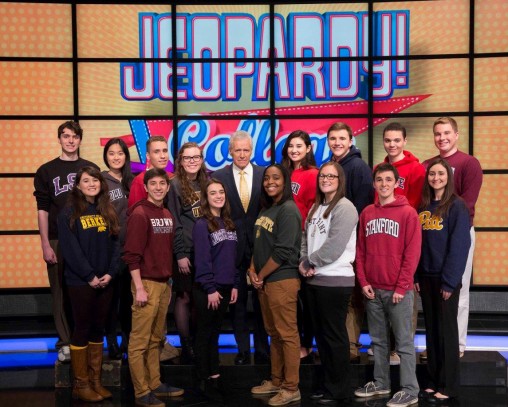 Emily Bingham was among the 15 contestants competing in the “Jeopardy! College Championship,” which was filmed at Sony Pictures Studios’ Stage 10 in Culver City, California.

When she arrived at Wright State in 2011, Bingham realized that besides knowledge about literature she had also pick up a little bit of science, history and art along the way. She has since become more knowledgeable in psychology, sociology and anthropology. And she got even more practice when she founded a Quiz Bowl team at Wright State.

Bingham is also editor of The Fogdog Review, the campus’ literary review magazine. She was active in Student Government, serving as director of campus culture, and was secretary of the Dean’s Student Advisory Board in the College of Liberal Arts. She currently works at Wright State’s Center for Urban and Public Affairs and is a marketing intern at the Wright State Alumni Association.

Last year, Bingham passed the online “Jeopardy!” quiz, which involves 50 questions that each must be answered within 15 seconds. In November, she was invited to an in-person tryout at the Le Méridien Columbus hotel in Ohio’s capital city. There was a written test, a personality interview and a mock “Jeopardy!” competition with buzzers.