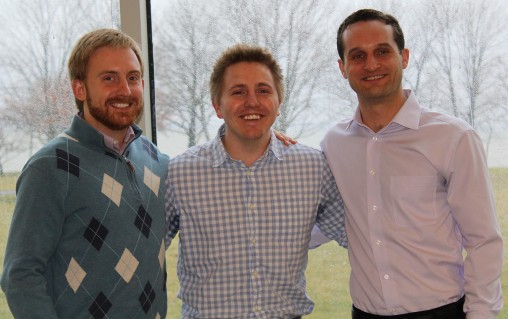 Many Boonshoft School of Medicine students, including Chris Champlin, left, Bryce Kerr and Michael Schneider are participating in rural clinical clerkships in family medicine and pediatrics as part of the Wright Rural Health Initiative.

Wright State received a $400,000 gift from the Mercer Health Care Foundation Fund under the umbrella of the Mercer County Civic Foundation for the Wright State University-Lake Campus medical program, and a $300,000 grant to WHRI from HealthPath Foundation of Ohio, a Cincinnati organization dedicated to improving Ohioans’ access to health care.

The initiative was created in 2014 to improve rural health care access by increasing the number of students and residents who train and practice in smaller communities. Goals include creating opportunities for medical, nursing and pharmacy students to work together; expanding residency training sites to include rural communities; and increasing financial aid for underrepresented students.

Boonshoft School of Medicine‘s collaboration with the Lake Campus allows medical students who wish to pursue a career in a rural area to complete clerkships in family medicine and pediatrics while living on the Lake Campus on Grand Lake St. Marys between Celina and St. Marys.

“The Wright Rural Health Initiative is very important,” said Therese Zink, M.D., professor and chair of the Department of Family Medicine at the Boonshoft School of Medicine. “There is a huge need for rural physicians across the United States. Ohio has that issue, too.”

Of the more than 11 million people who live in Ohio, at least 20 percent of the population lives in a rural area.

“Yet the physicians we train tend to live in the cities,” Zink said. “We want to change that trend.”

Exposure to rural areas during medical school is one of the keys to attracting future doctors to consider practicing in small communities, Zink said.

She and others are developing relationships with health partners, hospitals and physicians in Mercer County, where the Lake Campus is located as well as surrounding counties. The medical school also is starting a rural residency track near the Lake Campus. A resident would serve three years in the local community.

Already, third- and fourth-year medical students are benefiting from the four- to six-week rural clinical clerkships in family medicine and pediatrics. To help with living expenses, the medical students can stay for free in a four-bedroom townhouse-style apartment at Lake Campus.

“Four generations from the same family go to the same doctor,” said Kerr, who was at Grand Lake Primary Care at St. Marys in August and September 2015. “That’s not something you see in the bigger cities.”

Part of the goal of the initiative is for medical students and residents to get involved in the community so that they gain a better understanding of what it is like to live in a small town or rural community.

“It’s nice to run into patients in the community, whether at the grocery store or the local high school sporting events,” Zink said. “We want our medical students to become involved in the community and understand the dynamics of being a professional in a small town.”

Chris Champlin, a third-year medical student, experienced that sense of community during his clerkship this past fall. He attended football games with the doctor he worked with in his clerkship.

“I really enjoyed feeling a part of the community,” he said. “The experience certainly opened my eyes to the possibility of practicing in a small town or rural community.”

Michael Schneider, also a third-year medical student, was surprised at how well developed the community’s health system is. His clerkship was with two doctors in the Grand Lake Health System.

“The doctors that I worked with are an integral part of the community,” he said. “They provide expertise and excellent health care to the residents of this community.”

John Irmscher, chair of the advisory committee of the Mercer Health Care Foundation Fund under the umbrella of the Mercer County Civic Foundation, said he and other community leaders see the Wright Rural Health Initiative as in investment in the community’s future.

“We are excited about the Wright Rural Health Initiative and the medical program at Wright State University-Lake Campus,” he said. “This will help us improve health care in Mercer County as more medical, nursing and pharmacy students are introduced to providing health care in a rural area or small town.”