Wright State University senior Emily Bingham advanced in the “Jeopardy! College Championship,” thrilling a crowd of supporters who gathered to cheer her on at an off-campus “Jeopardy!” watch party.

Sporting a green and gold Wright State sweatshirt, Bingham battled with students from Louisiana State University and Northeastern University in the episode that aired Feb. 2, finishing in first place on Day Two of the tournament’s five-day quarterfinal round.

Nearly 200 raucous supporters sardined into the party room at Fox & Hound Sports Tavern in Beavercreek to support Bingham as part of an event sponsored by the Wright State Alumni Association. A national viewing audience estimated at 8.2 million people also watched her compete.

“It was so nerve-wracking watching myself on TV,” Bingham said. “I knew there would be a crowd here, but I didn’t know they would be reacting every time I missed something or every time I got something.” 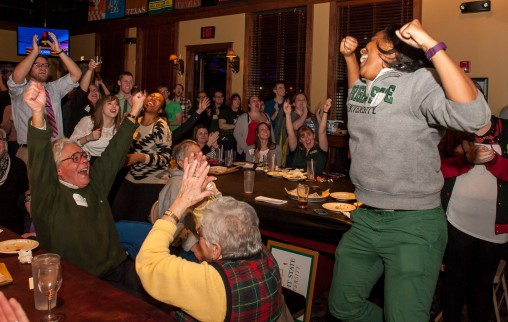 Wright State senior Emily Bingham and about 200 supporters celebrated at a watch party after Bingham advanced to the semifinals in the “Jeopardy! College Championship.” (Photos by Erin Pence)

Just before the episode aired, Bingham thanked the crowd for turning out. She said she was overwhelmed by the numbers and that the other “Jeopardy!” contestants would be jealous.

“You all are wonderful in how you’ve been supporting me because a lot of other schools are not doing that,” she said.

The “Jeopardy!” categories included topics such as The 1800s, Misspelled Words, Non-Potent Potables, Band-Aids, English Literature, Who Said That?, Man Made and Transportation.

Each time Bingham came up with a correct response, a deafening roar went up from the watch party crowd. There were cheers when she scored with responses such as Kool-Aid, photograph, San Francisco, espresso, France, Robert Griffin III, Camry, slope, Van Gogh and Bob Marley.

Bingham, who is double majoring in literature and marketing, hit her stride with the English literature category, ballooning her score.

“When I saw English Lit, I knew that I was going to have a category I was going to do OK in,” she said. “I thought that if the Daily Double was there, I have a chance to make my move.” 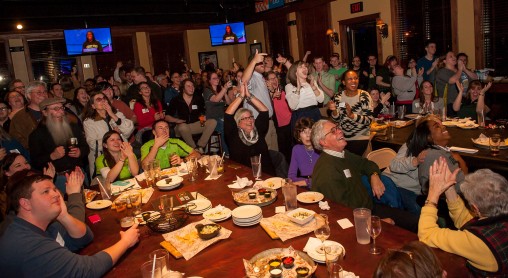 Nearly 200 people attended the watch party, which was sponsored by the Wright State Alumni Association.

Going into the Final Jeopardy category of Etymology, it was Bingham leading with $17,600, followed by LSU’s Kevin Brown with $12,600 and Northeastern’s Kate Laubscher with $7,200. Bingham finished first after she correctly came up with “What is amateur?” — a word that refers to someone who is not an expert and is from the Latin for “love.” She wagered $0 and finished with $17,600.

Bingham said she elected not to wager any money in Final Jeopardy in hopes of increasing her chances of advancing even if she didn’t win the round.

After the quarterfinals conclude on Feb. 5, the winners and four highest-scoring non-winners from the field of 15 contestants will compete in the semifinals that air next week. The overall first-place winner will win $100,000, an amount Bingham calls “life-changing money.”

Bingham watched the show at a front table with her mother. After winning, Bingham gave a hug to her mother, who teared up with emotion. Bingham then waded through the crowd, thanking friends and returning high fives.

Wright State President David R. Hopkins was among the cheerleaders in the crowd.

“It felt like the Super Bowl. The crowd was amazing; Emily was amazing. What a wonderful representation of our university,” Hopkins said. “It’s just wonderful for Emily for all that she’s done, all the work that she’s put in, to see her really shine on national TV.”

Hopkins said Bingham’s performance says a lot about how Wright State is coming of age and about the high quality of its students. 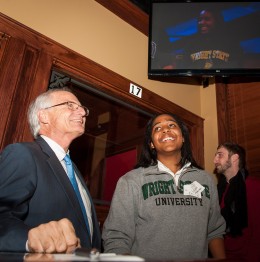 Wright State President David R. Hopkins was among the cheerleaders in the crowd at the watch party.

“Emily is just an example of what we see every day at Wright State,” he said.

Prior to the competition, Bingham studied over winter break, focusing on world capitals, geography and U.S. presidents. But she said it didn’t help her in the contest because she was at the mercy of the categories.

She said she was a bundle of nerves when she traveled to Sony Pictures Studios’ Stage 10 in Culver City, California, to film the shows on Jan. 5-6.

“The whole time I was on the plane there and the day before we started, I thought I was going to have a heart attack. I was dying on the way because I was so nervous,” she said. “I was so excited because this is what I had been dreaming of for years and years. And I just knew I was going to screw it up.”

Bingham confessed that as a young girl, “Jeopardy!” “bored me to tears because I didn’t know anything.” But she said she caught the “Jeopardy!” fever after competing in Quiz Bowl in high school.

Bingham was valedictorian at Northmont High School. In addition to Quiz Bowl, she was a volunteer at Clubhouse, a program that works with inner-city elementary school kids after school and during the summer.

At Wright State, Bingham is editor of The Fogdog Review, the university’s literary review magazine. She was active in Student Government, serving as director of campus culture, and was secretary of the Dean’s Student Advisory Board in the College of Liberal Arts. She currently works at Wright State’s Center for Urban and Public Affairs and is a marketing intern at the Wright State Alumni Association.

Bingham won a valedictorian scholarship as well as a Top Honors scholarship, which requires her to complete an undergraduate thesis. As a literature and marketing major, she is open to a career in publishing but is also exploring other options.