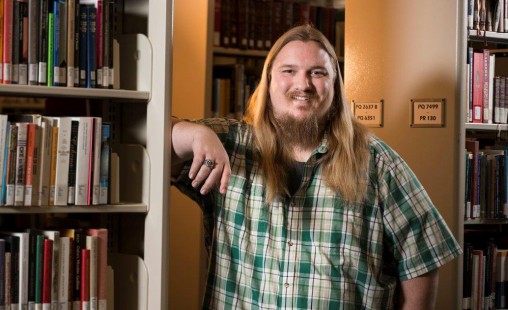 Wright State senior Matt Garrett shines in the university’s creative writing program, inspired by magic, monsters and wizards from the fantasy genre. (Photo by Will Jones)

Magic, monsters, wizards, things that go bump in the night. These are things that fire the imagination and stir the creative juices of Matt Garrett, whose storytelling skills have enabled him to soar at Wright State University.

The 34-year-old senior is carrying a 3.94 GPA and is scheduled to graduate this spring with a bachelor’s degree in English with a focus in creative writing. He will begin working on his master’s in literature at Wright State in the fall.

“I’ve been interested in writing since I was very small,” said Garrett. “Creative writing was my favorite type of writing. And it’s always been science fiction — amazing stories, magic, monsters, that type of thing.”

“The main character Harry Dresden is a wizard,” Garrett said. “The concept behind it is that things that go bump in the night — every myth and legend you’ve ever heard about — are real. But they keep it hidden from the populace at large.”

Garrett grew up in nearby Xenia. He excelled on the football team at Xenia High School, playing both offensive line and defensive tackle. One of his teammates — whom he had played with since Pee Wee Football — was Trent Cole, who went on to play linebacker in the National Football League with the Philadelphia Eagles and Indianapolis Colts.

After graduating, Garrett went to Wofford College in Spartanburg, South Carolina, on a football scholarship. But during the second week of summer practice, his knee collapsed.

“I decided that even though I loved football, I didn’t want to be walking with a cane by the time I was 30,” he said.

Garrett returned home and for the next 12 years worked as a manager in the restaurant business. He decided to return to college in hopes of becoming a teacher. After starting at Sinclair Community College in Dayton, he transferred to Wright State in 2012.

“Coming here to Wright State has been awesome. I’m loving it,” he said. “My professors are amazing. They have consistently made themselves available and mentored me.”

As part of Wright State’s Director’s Lab, Garrett will put on a play in April that he wrote in a playwriting class and was inspired by Lovecraftian horror. Named after author H.P. Lovecraft, the genre is a kind of horror fiction that emphasizes the cosmic horror of the unknown more than gore or other elements of shock.

Garrett’s 10-minute play, called “The Tattered King,” is set in the 1920s. It features a mental patient and his psychiatrist, who goes insane trying to figure out why the patient has committed a series of murders.

“It is the first play I’ve ever written. It was so tough,” he said. “I normally spend a lot of time writing action sequences and descriptions of characters and area. For the play, it had to be all dialogue that tells the story with very little action. It was difficult, but it was a lot of fun.”

Garrett’s career goal is to get his Ph.D. and teach creative writing, as well as classics like “Beowulf” and “Frankenstein,” at the college level.

Garrett and his wife live in Xenia. They have two daughters, ages 7 and 8.

To relax, Garrett reads and meets regularly with friends to take part in role-playing games such as “Dungeons and Dragons.”

“The role-playing games really allow me to step out of being Matt, being dad, being a student,” he said. “It really helps me recharge the batteries.”