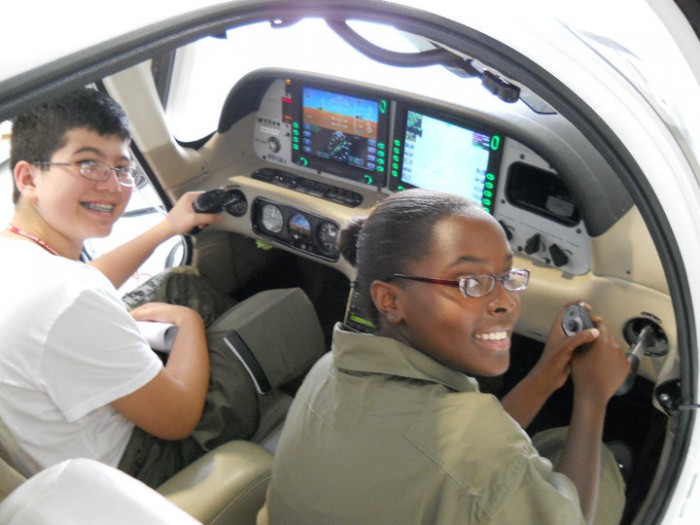 For its seventh year, Air Camp is expanding its unique aviation experience at its summer camps, adding educational events throughout the year and providing more resources to teachers.

Air Camp is designed to inspire middle school students to learn the science, technology, engineering and mathematics (STEM) behind aviation and aeronautics, through hands-on learning activities and the thrill of flying a plane. The camp features curriculum created for the new wing at the National Museum of the United States Air Force.

In summer 2016, three camp sessions will offer new experiences as students travel to Dayton’s one-of-a-kind aviation sites from their home base at Wright State University.

Applications for the summer camps are now being accepted at www.aircampusa.com.
“Air Camp is building on its six years of success to expand our reach to more students to pursue further education and careers in STEM subjects,” said Vince Russo, president of the Air Camp board of trustees. “We look forward to offering more camp sessions to more age groups in the future.”

“Air Camp has developed an exciting, aviation-focused STEM curriculum, and we plan to provide greater access to the Air Camp experience year-round to students throughout Ohio and nationwide,” said Shannon Coblentz, director of operations for Air Camp. “We will be announcing new events in the coming year, as well as sharing our curriculum with teachers so that they can bring Air Camp to the classroom.”

During the weeklong sessions, Air Camp students discover the exciting aviation resources of the Dayton region. The June sessions take place before and after the Vectren Dayton Air Show on June 18 and 19, featuring the U.S. Navy Blue Angels, which students and their parents may choose to attend.

Students will be chosen for each session by a competitive application process. Applications are available at AirCampUSA.com for students entering the seventh through ninth grades in fall 2016.

A teacher recommendation is required, and tuition is $995, with a limited number of need-based scholarships available. The initial deadline for applications is April 30.

Air Camp will offer a workshop for Ohio educators who teach STEM subjects to sixth- through 10th-grade students Sept. 30-Oct. 2.

The Air Camp summer curriculum has been redesigned for the classroom to make STEM subjects come alive, while meeting all Ohio and Common Core standards. The objective is to share Air Camp’s instructional techniques and tools with thousands of students throughout Ohio.

For more information, visit aircampusa.com or find the organization on Facebook.