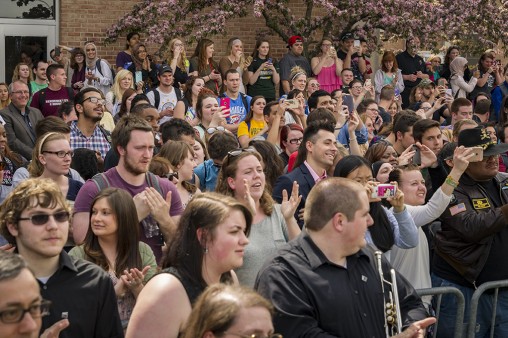 Nearly 2,000 students, faculty, staff and others turned out April 19 to see Tom Hanks and witness the ribbon-cutting for the newly renovated Tom Hanks Center for Motion Pictures. (Photo by Chris Snyder)

Excitement and anticipation filled the air as students crowded around the Tom Hanks Motion Pictures Center for the dedication of the newly renovated building.

Trumpets blew and cellphones were held high as the doors opened when actor Tom Hanks greeted the crowd.

Cheers broke out, cameras were flashing and students could be seen standing inside the Dunbar Library watching from the library windows. Some students waited almost three hours to see Hanks.

“It was a proud moment. He’s one of the best actors ever,” said Matt Cline, a junior who dressed as the famous Hanks character Forrest Gump. “It makes me proud to be a student here and that Wright State gets national attention.”

While waiting for the ceremony to begin, some students reflected on what Hanks said earlier in the day during a “Talk Back” session they attended with the Hollywood star. Others noticed the size of the crowd while some students were on their cellphones telling their friends to meet them.

With smiles on their faces, students shared their excitement for the unique opportunity to see Hanks on campus.

“From where I’m from, he’s really big,” said Dinesh Mirando, a graduate student from Sri Lanka. “It’s a once-in-a-lifetime opportunity to see a celebrity. I’ve seen almost all of his movies. … I’m so excited and I’m so glad I’m part of it.”

“I think of excitement for the university. It’s a great way to get ready for the presidential debate,” said Rachel Coomer, a senior. “It’ll bring great coverage to the university to show who we are, what we do.”

“It’s a big deal for me. I watched his movies growing up. It’s a little surreal,” said Derius Johnson, a sophomore.

If Johnson could meet Hanks, he said he would “say ‘thank you for all that you’ve done and for the university.’ Entertainment is something I’ve always wanted to do, and I’d ask him what it’s like and get a firsthand look into the industry.”

Students were curious about Hanks’ movie experience and how he performed while in school.

“My one question would be what made him so successful?” said Cline. “What separated him from other students and students like us? It sounds like he wasn’t a 4.0 student.”

Freshman student, Luke Faile, who has watched Hanks’ movies since he was young, would ask Hanks how he succeeded after failing in his early years.

Students also shared what they would say if they could personally meet Hanks.

“If I met him,” said Brenna Childers, a freshman, “I would express how amazing I think he is, ask him about his favorite memory about making movies, and then I’d ask if we could be best friends.”

“I think it’s a huge deal for this campus,” said Taylor Herzer, a senior. “Out of all the places he could be right now, he’s at Wright State.”